Why Beauty Leaves Us Breathless

Why Beauty Leaves Us Breathless

A vivid sunset, a misty horizon, the vibrant life of a colourful coral reef. In the presence of such beauty could we in fact be glimpsing something more?

Drawn from the new gift book Reflect with Sheridan, this is the second in a five-part video series exploring the book’s themes of joy, wonder, meaning, belonging, compassion, callings, seasons, change and hope. 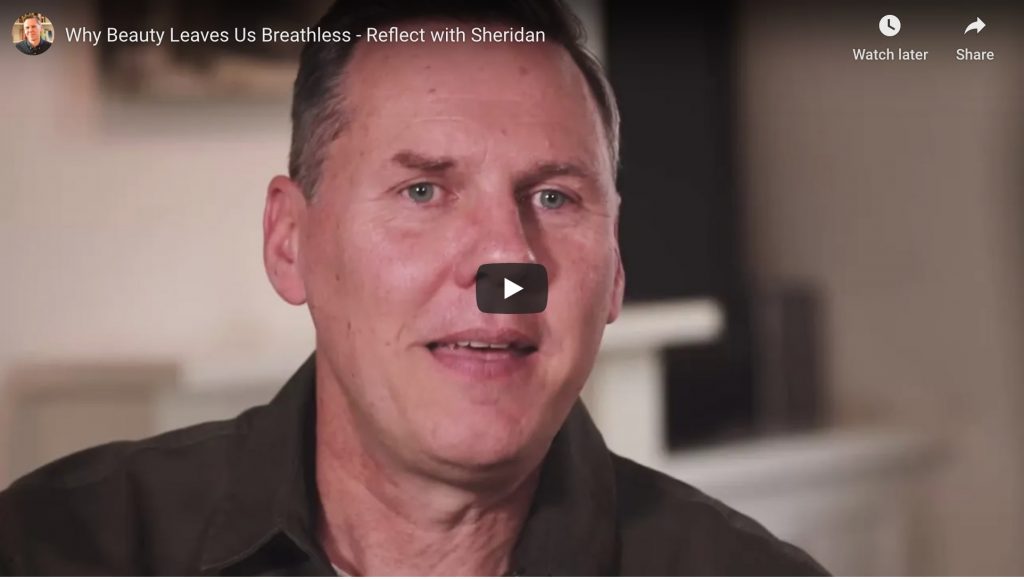 Some years ago, my wife and I boarded a small plane in Sydney, flew out over the Tasman Sea, and landed in one of the most beautiful places ever—Lord Howe Island. World Heritage listed for its rare plants and animals, it is a paradise of white sands, crystal waters, and untouched rainforests.

Lord Howe is shaped like a crescent with beaches on one side and a lagoon on the other. Swimming off the beach is an experience. One morning I swam with turtles, giant Trevally and shimmering Spangled Emperors, while a large Moon Wrasse hovered nearby, its body flickering blue, red and yellow like a billboard on Piccadilly Circus or Times Square.

The lagoon is equally impressive. A coral reef offshore breaks the waves, leaving the lagoon calm, sparkling, and shallow for hundreds of metres. And it’s there I had an experience I’ll never forget.

The Aquarium at my Feet

I was waist-deep in the lagoon, wading round some rocks, when something caught my eye. I stooped to look. At my feet was a mini reef of white, orange and purple corals, and in, around and through them scuttled a world of beautiful creatures: yellow-tailed Elegants rushing here and there; Butterfly Fish with black and yellow stripes; Nemo-style Clown Fish with big, bulging eyes. I towered like a giant over this thriving kingdom, but the fish didn’t mind. Some stared at me, curious about their visitor. I slid my hand into the water and three butterfly fish came to greet me.

The sand, the water, the aquarium at my feet—it was so overwhelmingly beautiful it made me pause in reverence.

In his classic speech The Weight of Glory, CS Lewis described natural beauty like this as ‘the scent of a flower we haven’t yet found’. Beauty points to an unseen source, and on that day I believed he was right.

The Unseen Source of Beauty

When the Jewish prophet Ezekiel encountered God he wasn’t shown a bearded man in white clothes. Instead he saw a brilliant blue throne and Someone seated there as radiant as fire with colours exploding all around him. Six hundred years later, Saint John saw something similar: a Being sparkling like precious stones, surrounded by a radiant rainbow. In the Christian scriptures God is revealed as beautiful. Maybe we’ve found the hidden flower—the source of the world’s beauty.

I’ll never forget that holiday on Lord Howe Island. And if CS Lewis is right, my reverence was appropriate. Because I wasn’t just encountering nature in that lagoon. I was glimpsing the very beauty of God.

Get this and 69 other stories on joy, compassion, wonder, callings and more in Reflect with Sheridan, my new gift book.

tags: Articles beauty creation nature sheridan voysey
0
previous You Can’t Be a Perfect Christian and That’s OK
next What is the Fruit of Love?
Related Posts