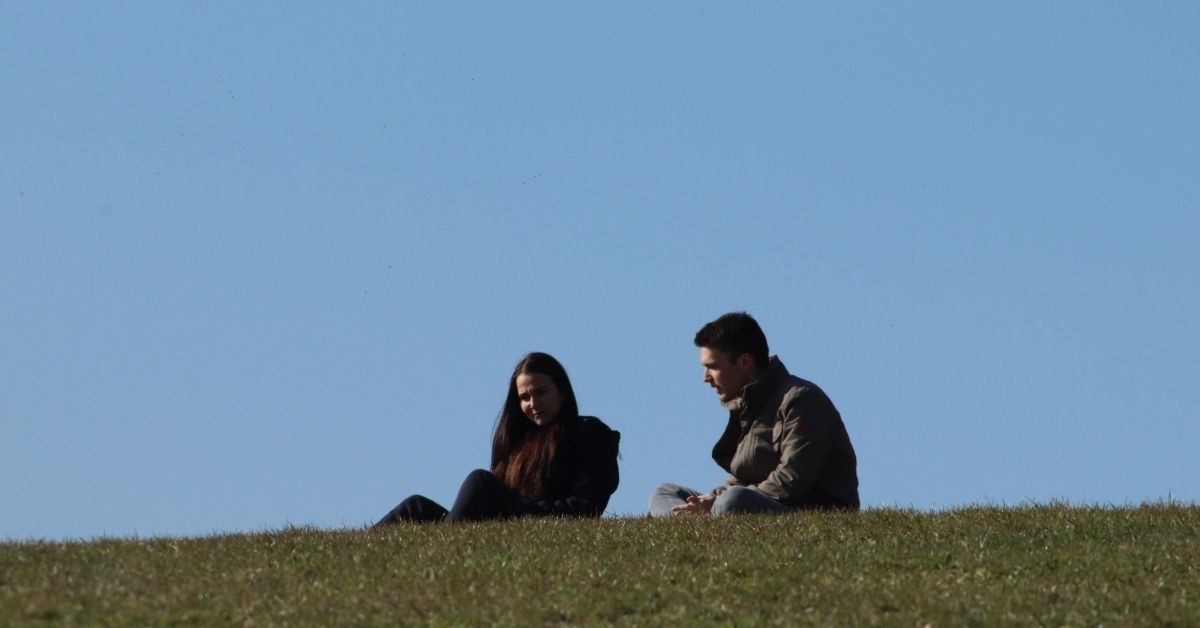 Religion may not make it into the top five topics that couples fight about (that’d be money, sex, work, parenting and housework, if you’re curious), but that doesn’t mean that religion doesn’t cause its fair share of conflicts–especially when both spouses have differing religious beliefs.

I never thought my husband and I fit into this category, but apparently to some, we do. After my series on Catholic and Protestant beliefs last year, in which I shared that my husband grew up Catholic and I grew up Baptist, I’ve had a few people email me asking how that works, exactly. Apparently Baptists and Catholics are bitter rivals or some such thing? I literally had no idea until we were married and it was too late to do anything about it 🙂

So, I’ve had people email me, asking:

“How does it work when you and your husband don’t believe the same thing? And do you have any tips or advice for people in the same situation?”

And honestly, this question surprised me a bit. My husband and I may not believe the exact same things, but it’s never really been a problem for us. Still, I can definitely see how it would be for many as it’s such a heated topic, and one with such huge, eternal implications.

And even just in the day-to-day–

What type of wedding do you have? Which church do you attend? What prayers do you teach your children? What school do you send them to? How do you deal with the knowledge that the people you love so dearly don’t know and believe what you consider to be such an important truth?

These are all issues that we’ve had to address as a couple, and it can be a tricky path to navigate.  So for anyone in a similar situation–here’s my advice to you.

1. Learn About Each Others’ Beliefs

As I was researching my Catholic/Protestant belief series, I came across SO many articles essentially bashing the Catholic Church. And the worst part was, when you looked at their reasoning, it was all based on incredibly common misconceptions about the Catholic Church. Had they done any research at all, they would have seen that what they were sharing was simply not true.

Don’t make this same mistake in your marriage.

Don’t just assume that your husband/wife is wrong, stupid or crazy for what he believes. Most religions don’t just pull their beliefs out of thin air. There are actual reasons for why they believe what they do–even if they are wrong.

So learn more about what they believe and why and share the same about your beliefs as well. You might be surprised by what you find.

Attend church services at each others’ churches–not just once but several times. Take part in each others’ religious traditions. Go to classes. Read books. Meet with a priest/pastor as well as other people in that same religion. Listen to radio programs and podcasts. Have deep (but friendly) discussions. Get to know all you can.

Over the past two years I have attended Mass, gone through RCIA, listened to Catholic radio, read Catholic books and articles, met with a priest a number of times to ask some pretty big questions, had some great discussions online, and most importantly, prayed about the issues and read my Bible for myself with fresh eyes.

Did doing all of that make me Catholic too? Nope. But I did learn a TON and saw that a lot of things I had been taught growing up simply weren’t accurate. It was very eye-opening.

Even if you and your spouse have two different labels (Catholic, Baptist, Mormon, Buddhist, Atheist or whatever), chances are you have more in common than you know. Find these commonalities and embrace them.

For us, personally, most of what we believe has always been the same anyways, even though we have two different labels. I’m still not a fan of the whole Mary/Saints thing and he may never be comfortable with raising his hands in church, but who cares? We both believe in the Bible, Jesus’s birth, death and resurrection and a whole slew of other, much more important, things.

Don’t let a few minor differences be the small crack satan uses to cause a big divide.

3. Adopt the Best Traditions of Both Worlds

So, getting back to the practical questions like “What type of wedding do you have?” “Which church do you attend?” and “What prayers do you teach your children?” your best bet is simply to draw from the best of both traditions.

Because so much of what we believe is the same anyway (and because most teaching is pretty watered down and basic for children anyway), this really isn’t an issue. As our children get older, they will need to research more and decide for themselves what they specifically believe, but that’s something that ALL of us should do at some point anyway.

Now, I wouldn’t recommend you doing something that goes expressly against your religious beliefs. But if your differences are mostly just different ways of doing things–why not give his a try?

While it’s certainly admirable to want to share what you believe with others (after all–if you have knowledge that can change and even save lives–doesn’t that make you a jerk if you DON’T share?), no one wants to be a “project.”

Instead of constantly trying to change your spouse and get them to see things your way, enjoy them for who they are and simply share pieces of your faith as you can.

Likewise, wives, be subject to your own husbands, so that even if some do not obey the word, they may be won without a word by the conduct of their wives, when they see your respectful and pure conduct.

Now, God is our ultimate authority, so you don’t have to listen to your husband if he is telling you to do something ridiculous that God clearly forbids. But, in the normal day-to-day things, yes, listen to him and let him lead. When the judgement day comes, he will be responsible for how he led his family and you will be responsible for how you behaved under his guidance.

But no one wants to be poked, prodded or nagged into believing, or much worse, simply following a set of rules they don’t agree with. It doesn’t work that way.

And last–but certainly not least–don’t forget to pray for your husband. Even if your differences sometimes feel like an insurmountable obstacle to you, nothing is impossible for God. And even though you may not be able to change your spouse’s heart, God can (and He can change yours too!)

Pray that God would give you peace and understanding. That both of your eyes would be open to the truth–whatever that is. That your differences would bring you closer to God and to each other, rather than pull you further apart. That God would use the entire situation for His glory. Just pray. And let God take care of the rest.

Whether you and your spouse are mostly alike in your beliefs or wildly different, you can still use your marriage to honour God and grow in faith together. You just have to be a little more intentional, a little more forgiving, a little more trusting and a little more laid back.

Do you and your spouse have similar beliefs or different? How has that affected both your marriage and your relationship with God?

About the Author: Brittany is a wife, a mother of three, a writer, author, teacher, and lover of Jesus.

What Makes A Marriage Happy?

When Should Kids Start Dating?