Upon The Death of a Celebrity – The World is Shocked

Upon The Death of a Celebrity – The World is Shocked

I woke up to the news that Kobe Bryant had died.

I told my daughter. “Oh my goodness!” exclaimed my indie-music loving, non sports-watching/playing 18 year old, “Did he really? How?”, before rushing off to tell her brother.

My 12 year old skating, non-basketball playing son came in, still in pyjamas, but sleep suddenly gone from his face. “Really?”

The worldwide reaction is one of shock and dismay.  Disbelief.  How could that happen?  Nine people, including Bryant and his 13 year old daughter immolated in a helicopter crash fireball.  Bryant’s helicopter.

Obama tweets.  Trump tweets.  The world tweets.  People who have no, or limited, interest in basketball, are shocked. Celebrity deaths, like Bryant’s, shock the world.

The first truly shocking celebrity death I recall was that of the most photographed woman on the planet, Princess Di. I still remember the day. Still remember talking about it at the soccer match I was playing. Still remember the disbelief of an opposing player when I told him. What? Did he think I was trying to put him off his game?

Now? Thanks to phone cameras, everyone woman can choose to be the most photographed woman on the planet, and some seem hell bent on being so. Some with names like Jennifer and Kim and stuff.

What is it about a celebrity death that shocks us?  Partly it’s because we believe that they belong to all of us. There’s a faux intimacy between a celebrity and the world that both sides of that divide will admit. Their death draws us in just as their life did.

But it is faux intimacy and therefore a faux grief. A meaningful faux, if such a thing exists, but faux nonetheless. Bryant had a wife and four children, but we barely think about his wife at this time. His friends and acquaintances will, but not us. Their grief will last longer than their shock, while our shock will imitate grief, but will most likely not be.

We know this to be so because shock wears off, while grief goes on and on and on. His poor family at this time, all that grief and a world watching it. Which makes me think that William and Harry turned out pretty normal all things considered, after their mother’s death.

The shock is also because we view such people as belonging to the pantheon of late modern gods. The Halls of Fame are the new Halls of Valhalla, where the god of the dead Odin would permit the worthy to reside. Death was different back in the day.  It was a doorway to somewhere else. Now? Fame opens doors, not death. Valhalla is not our hope.

And of course the shock is death itself. Especially an untimely death. Celebrities who are still young, still performing on the global stage, are not supposed to die. Hollywood types should die at 90, mourning, but not shock. Lovely words spoken by fellow actors about their careers,  and by grandchildren about their families.

Death never ceases to shock. Never. It’s not designed to be smooth. It’s designed to be rough and unnatural. In a sense it’s not design at all, it’s “undesign” – an unravelling of all that is good and true. That’s why the Bible tells us in that great chapter about resurrection, 1 Corinthian 15, that “the sting of death is sin”, and not the other way around. Sin has sharpened the lance of death in a way that it was not designed to.

Bryant’s death brings our own death to the fore of our minds, even if we think we haven’t thought about it. It pushes death into our face, no matter which way we wriggle or squirm to avert it. I was told a decade ago I had six months to live. I was shocked and confronted, not just at leaving my family, but the imminence of death. Even as one who believes in the resurrection.

We drive past many a hearse in our day-to-day lives, but we are inured to the deaths of those we don’t know. We sit at the lights with a car sitting next to us that contains a box with a body in it. And we don’t shudder. Don’t despair. We don’t run into the traffic shouting with anguish that this is the end of us all.

My favourite book about death – if such a thing can be said – is The Death of Ivan Ilyich by Leo Tolstoy. War and Peace it ain’t. It’s short and sharp and stunning. When the novella’s character is announced as dead when of their number reads it out in the paper, Tolstoy lists this as the response:

“Besides considerations as to the possible transfers and promotions likely to result from Ivan Ilych’s death, the mere fact of the death of a near acquaintance aroused, as usual, in all who heard of it the complacent feeling that, “it is he who is dead and not I.” 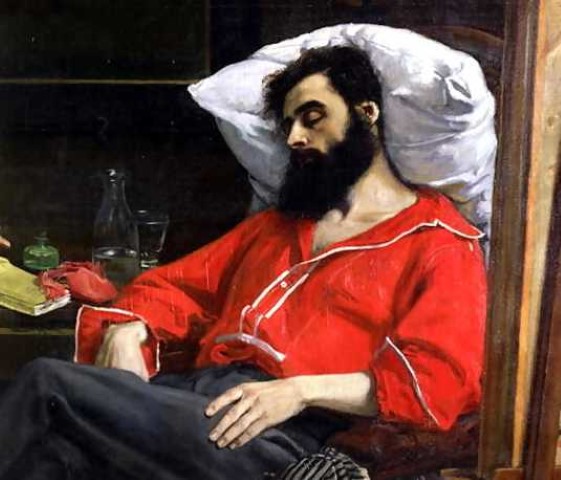 Yes that’s it, isn’t it? I think this translation nails it using the word “complacent”. Other translations use the word “gleeful”, which does not, I think, get to the heart of it. It’s complacency at some level, a refusal to countenance one’s own death, not exuberance that you dodged the bullet.

I have conducted enough funerals – and attended even more – to know that the closer to the front of the cortege you walk the less complacent you are.  At the back the conversation is about football, whitegoods, work and holidays.  Once again Tolstoy nails that:

“Each one thought or felt, “Well, he’s dead but I’m alive!”  But the more intimate of Ivan Ilych’s acquaintances, his so-called friends, could not help thinking also that they would now have to fulfil the very tiresome demands of propriety by attending the funeral service and paying a visit of condolence to the widow.”

Too harsh perhaps. But Tolstoy didn’t get much wrong about the human condition, especially not in terms of our inner life. Mind you, The closer to the front of that walk to the graveside, the more sober. Until you are in the car as the grieving family.  No complacency there. And then, finally, one day, it will be you in the hearse.  Now let’s talk about complacency.

So Bryant’s death affects us collectively in ways that non-celebrity deaths don’t. We shared their public lives in that they were part of our collective conscious. Privately, they loved, laughed, argued, had relationships, went to the toilet, squeezed pimples, and swore in traffic. And – sadly – in Bryant’s case, accusations of sexual assault back in the early 2000’s. But publicly they were projections of our ideals about life. Their deaths challenge our fears about death, and what it means for the mightiest of us to fall.

We need that passage for our impending non-celebrity deaths, and Bryant needed it too for his celebrity death, whether or not he availed himself of its truth, because death is the great leveller of all humanity before God. Which is exactly what it is supposed to be.

One day we will wake up to the news of another untimely celebrity death. Some of us will at least, as some of us who read this may have died in the interim. Let’s take the opportunity this shocking death affords to ready ourselves for what will come to us all, if the only One who defeated death tarries in His return.