Lightyear: Pixar’s Back With its Toy Story Spinoff [Movie Review] Singer Levi McGrath is Breaking Down Barriers in Hearts & Minds “Social Glyphosate”, aka Individualism, and How It’s Withering Our Society Pretending to be God Understanding the mindset of someone who wants to end their own life is a hard thing for those who have never struggled with mental illness.

Sadly, for Australian young people they’re losing far too many of their friends to suicide, with Health Direct reporting it’s the leading cause of death among young people in the country – about 350 young people aged 15–24 years take their own lives every year, which is more than the number who die on the roads. And, for every youth suicide, there are 100 to 200 more attempts.

Filmmaker and co-founder of Voices of Hope Jazz Thornton was one of these young people. She attempted suicide multiple times and realised the system designed to support her was failing her and her friends, and wanted to do something about it.

Beginning with her NZME documentary series Jessica’s Tree and now her full-length film The Girl on the Bridge, Jazz Thornton wants to reveal what suicide is from the inside, and help people better understand what ‘help’ really looks likes.

Telling the story of a friend she lost, Jazz shows us how it feels to be someone looking back wanting to help, and the function of guilt in the lives of survivors.

As she interviews Jess’s family and friends, and investigates the stigmas surrounding suicide, we see how the burden of depression and suicidal ideation is misunderstood by so many and why even the smallest cries for help can’t be overlooked.

In an interview Jazz said, “This generation is wanting to talk about mental health issues more than ever before, and they’re being silenced from doing so”.

“Often by statements from people – like parents – saying ‘Oh, we had it worse, you have no reason to feel like that’, it minimises everything going on for them, and they feel like they can’t speak out until they hit crisi,” she said.

One of the beliefs about suicide Jazz frequently confronts is that it’s selfish.

In The Girl on the Bridge, we see how those around Jess couldn’t fathom why she’d leave them and intentionally let them experience the pain of her loss. But Jazz said to call suicide “selfish” misses the real issue at hand.

“As someone who has been there myself, every time that I [attempted suicide] I genuinely believed as a solid fact that the world was better off without me. I wasn’t thinking about how it would affect everyone else because I truly believed that it wasn’t going to.”

In order to prevent suicide, it’s those beliefs about themselves that Jazz said suicidal people need help correcting. In the documentary, she explains it as “behaviour modification versus belief correction”.

“None of that [self-harming] behaviour changes unless we correct the beliefs that are making that behaviour prevalent,” Jazz said.

“I was responding with self-harm because… I believed that I was a burden. That I was unlovable.

“When it comes to addressing mental illness and when you’re struggling with [destructive] behaviours, it’s really important that both the person themselves know. But also, those supporting them, that it isn’t about behaviour modification but trying to correct the beliefs behind those behaviours.”

A practical way Jazz began to correct her beliefs was by writing down all the positive things others said about her that contradicted her own internal narrative.

When she was in the psych ward, Jazz said, “I wrote down on a piece of paper, ‘I’m a burden, I’m unlovable…’ and then on the other side, every time anyone around me would say or do anything that contradicted those beliefs I would write it down, date it, and put their name next to it”.

“Eventually I ended up with this huge list – and it would just be things like, ‘Jazz I love you’, or ‘I’m proud of you’, or ‘I believe in you’… so when my mind was feeling these negative things I would pull this list out and have solid evidence in front of me that my internal reality wasn’t matching the external truth,” she said.

As the documentary hits screens, Jazz said her biggest hope was that “we come to understand that suicide prevention is everyone’s responsibility”.

“I talk a lot in schools about when it comes to bullying, that you’ve got three people in every situation: the bully, the victim and the bystander, and the bystander holds the most power. And that’s the same in the [context of mental illness]. 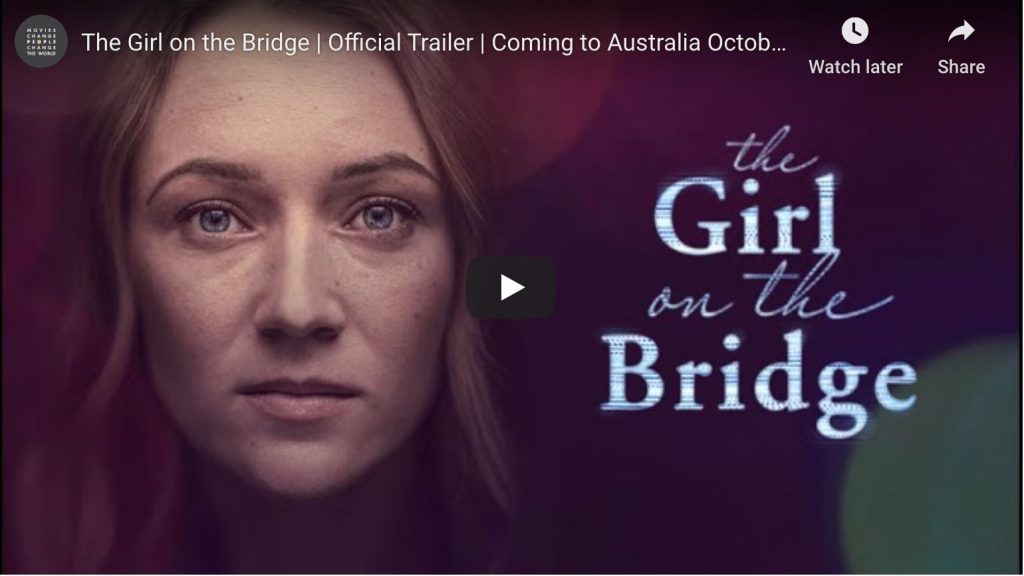 The Girl on the Bridge is available to watch online and in select cinemas nationally. It was released to coincide with Mental Health Week (October 10-17).