The majority of Australians believe there is a connection between spirituality and wellbeing, and that using spiritual practices during tough times is important.

Nearly seven in ten Australians thought spiritual practices were important during the recent national crises of COVID and the devastating bushfires, according to the Australian Community Survey (ACS) conducted by National Church Life Survey (NCLS) Research. 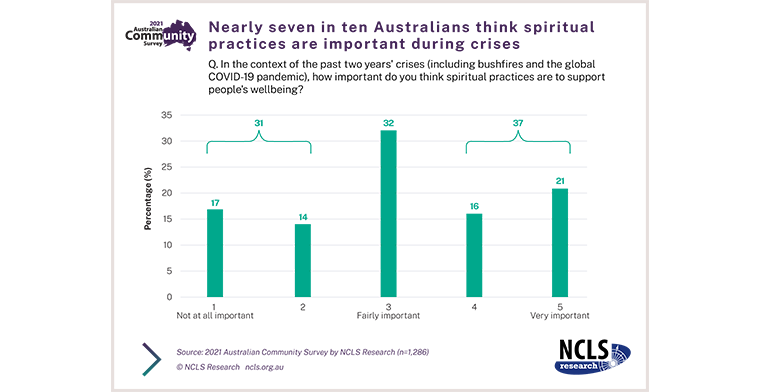 “Late last year we learned that around half of Australians were drawing on spiritual practices,” NCLS Research’s Director Dr Ruth Powell said. “I imagine the devastating March floods would have seen people relying on spiritual resources in similar ways.”

She said the three most appealing spiritual practices from a suggested list of options were spending time in nature or outdoors, listening to uplifting music, and expressions of prayer, meditation or mindfulness. 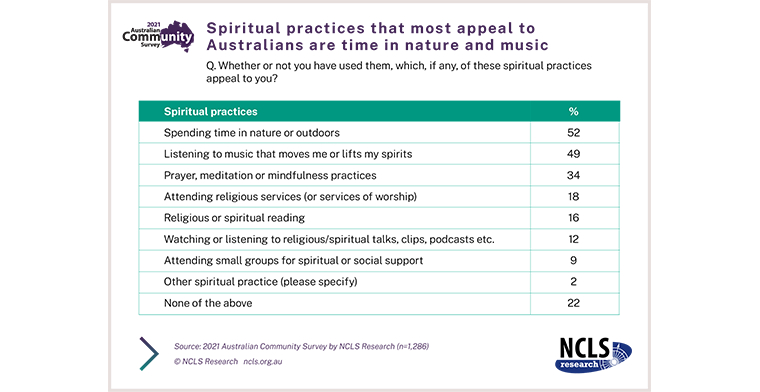 When it comes to relational resources, around a quarter of Australians either have no-one to call on for support or are unsure about who to call.

“Stress levels generally were higher in November 2021 than 12 months earlier,” Dr Powell said. “COVID-19 might not be a new phenomenon but stress levels have climbed.

“According to our findings, more than half of Australians are moderately stressed.”

Conversely, in late 2020, 86% scored at least 5 out of 10 for being generally happy with their lives. But one year later that figure dropped to 79%.

The ACS compares the attitudes of church attenders and the wider community on a range of social issues, tracks religiosity, and evaluates how the Australian community views churches in society.

To receive latest updates and insights from NLCS head to their website.