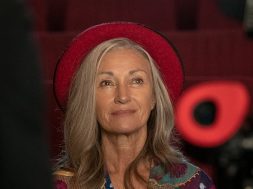 In 2022, there are an estimated 487,500 Australians living with dementia* – making new Australian film ‘Ruby’s Choice’ a timely conversation starter, on the impact of dementia on Australian families.

After accidentally burning down her house, Ruby (portrayed by Jane Seymour) is forced to move into her daughter’s crowded house. Told from the perspective of Ruby’s granddaughter, played by Coco Jack Gillies, this is a film for all ages.

“You get to see a lot of the humour between the granddaughter and her grandmother, the struggle of the mother and how she has to pull the whole family together. Jane Seymour has done an amazing job portraying Ruby” says Jessica Butland of Radioactive Pictures, a Brisbane based production and distribution company responsible for ‘Ruby’s Choice’.

Their hope, alongside director Michael Budd and the key charity partner Dementia Care Intentional, was to help families who don’t know how to handle a dementia diagnosis.

“Ruby’s Choice’ is showing that someone with dementia can still have a meaningful impact in your life, they just have different needs. As a society, we don’t currently know how to meet those needs” says Jessica Butland.

Ruby’s Choice will offer hope and inspiration and will particularly resonate with audiences touched by dementia.

“It gave me a lot of hope for the future of those living with dementia.”

“I saw a lot of what my grandmother went through with dementia. We went through all the things that you see Jane Seymour as Ruby go through but it really gave me peace. It gave me a lot of hope for the future of those living with dementia,” says Jessica.

A portion of ‘Ruby’s Choice’ profits will go to Dementia Care International and its charity arm Dementia Foundation for Spark of Life who is transforming the lives of people with dementia all across Australia. As the official charity partner for the film, they worked to ensure the story reflected real life experiences of families dealing with dementia.

* according to research by NATSEM, University of Canberra.