Aussie flicks can sometimes get a bad rap. We have a reputation for going iconically cringe-worthy in movies like The Castle or Crocodile Dundee, or for favouring our dark side in ones like Wolf Creek and Animal Kingdom.

Gems in the middle like Rabbit Proof Fence, The Sapphires, or more recently The Dressmaker get overlooked and we forget how stand-out Australian stories can be.

As Ride Like a Girl hits cinemas, it’s a powerful reminder of the grit and resilience within so many of us, and just how far our determination can take us.

“The world of horse racing is opened to us, and we see all its dangers and thrills, and how an entire community backed one girl to win.”

Based on the life of jockey Michelle Payne (Teresa Palmer), Ride Like a Girl tracks her rise from the youngest of 10 in an “Irish-Catholic rabble household”, in the words of director Rachel Griffiths, to becoming the first woman to win the Melbourne Cup in 2015. Having lost her Mum to a car accident at just six months old, Michelle was raised by her Dad Paddy (Sam Neill), and grew up around horses and jockey life.

We follow Michelle as she trains for races, tries to convince her Dad to let her compete, and suffers severe injury from a fall on the track. The world of horse racing is opened to us, and we see all its dangers and thrills, and how an entire community backed this one girl to win. 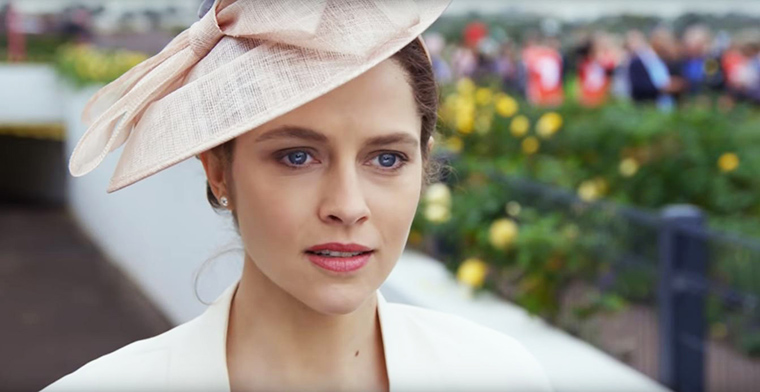 When first-time director Rachel Griffiths (a seasoned actor with lead roles in Muriel’s Wedding and TV’s Six Feet Under) saw Michelle’s win, she knew it was a story she wanted to tell.

To do that, included having Michelle’s brother Stevie (pictured), who has Down Syndrome, play himself – one of the best decisions Rachel made.

“I’ve worked with actors with Down Syndrome before”, said Rachel. “And they have such a compelling magic to them… they reveal everything. They hide nothing, and something quite wonderful happens.”

Stevie’s comic-timing is second to none, and his authentic responses gives Ride Like a Girl a feeling of familiarity and warmth few movies can reproduce.

Honest About the Family’s Catholic Faith

The way Ride Like a Girl incorporates the families faith is also entirely refreshing.

In one of the first scenes Michelle’s Dad Paddy tries to wrangle the family into the back of their station wagon to get to church on time, and as they sidle into the pews inappropriately late, you realise there’ll be no pretence here.

Paddy is a down-to-earth, no-nonsense dad who loves his children endlessly, and we see how his faith anchors that perspective. It helps him and the kids process the grief they’ve experienced, and gives Ride Like a Girl a layer of depth its corporate racing backdrop could’ve lacked.

Ride Like a Girl may be about a jockey, but it’s not really about sport. It’s about family, faith, and overcoming loss. It’s about a woman who was so clearly in a man’s world, but didn’t let that stop her from showing them how it should be, and achieving her dream.

Ride Like a Girl is one we can all enjoy, and is in cinemas now (click for screening times)—oh, and don’t worry, my copy of The Castle is exactly where it belongs: in the pool room.