Our self-destructive obsession with spectacle and being seen is at the forefront of director Jordan Peele’s mind in his expertly crafted, new thriller, Nope.

Jordan, half of the Key & Peele sketch team, cut his teeth in comedy before he made a surprising turn to horror. His latest entry is his most accomplished, mature outing yet.

In Nope, two horse ranchers, OJ and Emerald, struggle to keep their father’s ranch alive after his mysterious death. OJ (Daniel Kaluuya) is a soft-spoken stoic whose father started the first black-owned horse ranch that served the Hollywood film community for years. Their business was a source of great pride for the family. The younger Haywood never says much, nor does he care to be seen; it’s not in his nature. His only desire is to honor his father’s legacy.

On the other hand, Emerald (Keke Palmer) is OJ’s charismatic salesman sister. Her appetite for the spotlight proves more liability than asset. Emerald is a highlight, bringing charisma to spare for the brother and sister team. One day as they bicker about the ranch’s future, they discover something lurking behind the clouds, watching their every move. Does this mysterious visitor spell opportunity or doom?

Cinematographer Hoyte Van Hoytema (Dunkirk) utilizes stunning night time visuals and haunting wide-lens shots to bring the mountains to life, intentionally hiding the mysterious predator. Composer Michael Abels draws the audience into the mystery with a melancholy, haunting soundtrack. Yet, Kaluuya and Palmer capture our hearts as they wrestle through the unknown together.

The best horror is always a story that taps into everyday life’s real-life fears. What sets Peele apart from his contemporaries is his ability to use familiar horror tropes to tell a more meaningful message.

Nope is no different, yet it is more complex than his previous two outings. The Academy Award-winner’s third entry begins with a quote from Nahum 3:6 about God’s coming judgment upon Nineveh. As Nineveh has made a spectacle of itself at the expense of others, God will make a horrific spectacle of Nineveh in judgment.

On the surface, if the audience views Nope as nothing more than a UFO western, the Bible verse and opening scene with an unhinged chimp would seem disconnected and unnecessary. Yet, these thematic breadcrumbs are left along the way by Peele, the writer, for his audience to discover his ultimate message: our self-destructive obsession with seeing and being seen. The Bible uses different terminology for this obsession: glory.

Reel Dialogue: The God of all Glory 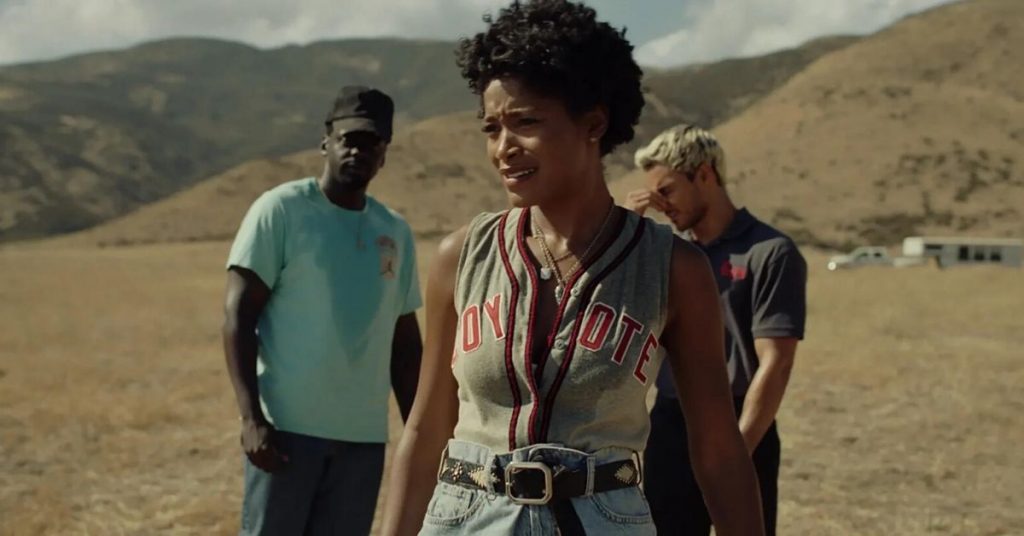 Peele illustrates a profoundly crucial theological point, central to the message of the gospel… we are all glory seekers. You don’t have to be religious to know that. We want to see glorious, awe-inspiring visions. Humanity also wants to display its own glory (value, worth) for the world to see. We post selfies of our carefully manicured lives while hiding our struggles to up our value and our glory in the eyes of others. When everyone seeks their own glory, our obsession with seeing and being seen turns destructive. Peele, knowingly or unknowingly, brings this into sharp focus. His characters must live with the trauma caused by others who sought their own glory at his character’s expense.

While Peele may not have found the answer to this theological riddle, he certainly put his finger on real, human horror. Thankfully, scripture points us to real solutions. You can read about Jesus’ glory in the gospel of John.

tags: Articles Movie Reviews movies reel dialogue Russ Matthews thriller movies
0
previous “It Doesn’t Have to Have a Price Tag to Be Worth Something” – Tauren Wells
next ‘Some Happy Day’ – New Film Humanises Homelessness
Related Posts