Priscilla Shirer on Finding True Identity, and Her Latest Screen Role in ‘Overcomer’

Priscilla Shirer on Finding True Identity, and Her Latest Screen Role in ‘Overcomer’

What makes you, you? Is your significance tied up in your profession, your online following, or your family background? What happens when those things come undone?

These are questions confronted in the Kendrick brothers’ new movie Overcomer. The scriptwriters behind War Room, Fireproof and Courageous tackle head-on our issues of identity, asking how we can maintain it through life’s fluctuations.

Basketball coach John Harrison (Alex Kendrick) and his team are thrown into disarray when their town’s largest manufacturing plant shuts down, and hundreds of people move away. John reluctantly agrees to coach cross-country running instead (despite a lack in interest in the sport), and becomes inspired by the grit of unlikely runner Hannah Scott.

It’s a powerful story, and one preacher and author Priscilla Shirer was keen to be a part of, after making her acting debut as Elizabeth Jordan in War Room.

“What draws me to these films,” said Priscilla, “is that they’re unapologetic gospel films. There’s no sugar-coating or watering down the name of Jesus, or the message of Jesus Christ. As a minister I just see it as a privilege that God has given me yet another opportunity, another way, to say the message I want to [share] anyway”, Priscilla said.

Playing Principal Olivia Brooks, Priscilla’s character becomes a mentor for Hannah Scott (Aryn Wright-Thompson), and an anchor for others in the movie.

“[Olivia’s] sort of the centrepiece between all of the other [characters] who are having their emotional crisis,” said Priscilla. “She’s just a voice of insight and reason to them all.

“What I appreciated about [Olivia], is that not only did she do her job, but sometimes she just takes the professional coat off, and she sits down with a student and she looks beyond what they’re saying, into their heart.

“She asks herself what she might say to the student that could literally change and affect the trajectory of their life… it’s a beautiful on-screen example for all of us.” 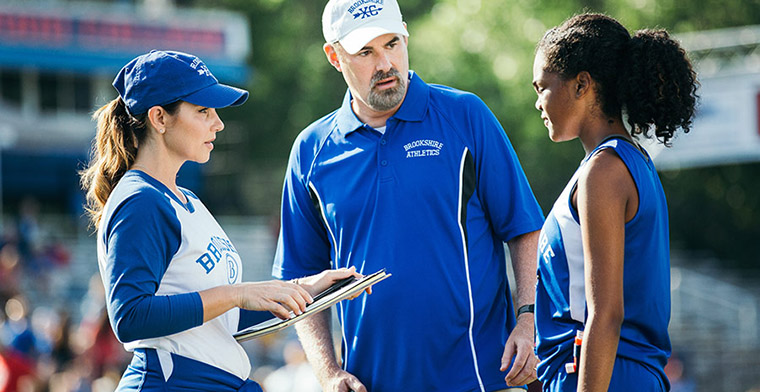 Her on-screen roles of mentor and mum are very true-to-life for Priscilla off-screen, too. With three sons of her own, and the eldest having just got his driver’s license (“my prayer life has been accentuated by 100 %”), Priscilla’s set on helping her boys ground their identity in Christ.

“I have spoken words of affirmation [that have] been take right out of the scriptures over my boys since they were little,” said Priscilla. “I’d line them up, and say the same thing with a few little changes here or there [every day] so they can repeat it back to me.

“Even though I know most days they didn’t want to hear it and [wanted] me to move on, the words [were] absorbing into their hearts, and into their minds.”

For the times when we are struggling with our own identity, Priscilla believes there’s a strong message to draw out of Overcomer.

“Traditionally it’s been promoted in our society that more successful you are, the more significant you are,” she said. “So men and women are in this rat race to climb some hypothetical ‘ladder of success’ at the expense of other things that really do matter.”

“There are many things I don’t realise my significance is illegitimately tied to, until those things are no longer here.”

“We see in John Harrison a man who has tucked his significance [into] his job, and he actually doesn’t realise it until it’s taken away. I realise from the film, even in my own life, there are many things I don’t realise my significance is illegitimately tied to, until those things are no longer here. Then when you don’t have them, to the extent that it devastates you, is the extent to which you know your significance was tied to it.

“If you’re disappointed that’s one thing. But if you’re devastated, and can’t function and can’t move forward, then you know that too much of your value was tied to that relationship, or that job, or that idea or that dream.