In a stunning development to what had been a harrowing case, WA girl Cleo Smith has been found alive.

In the early hours of Wednesday 3 November, police broke into a locked house in remote Carnarvon, 900km north of Perth, and found the four year old in one of the rooms.

One of the officers picked up the girl in his arms and asked, “What’s your name?”.

The girl responded, “My name is Cleo”. 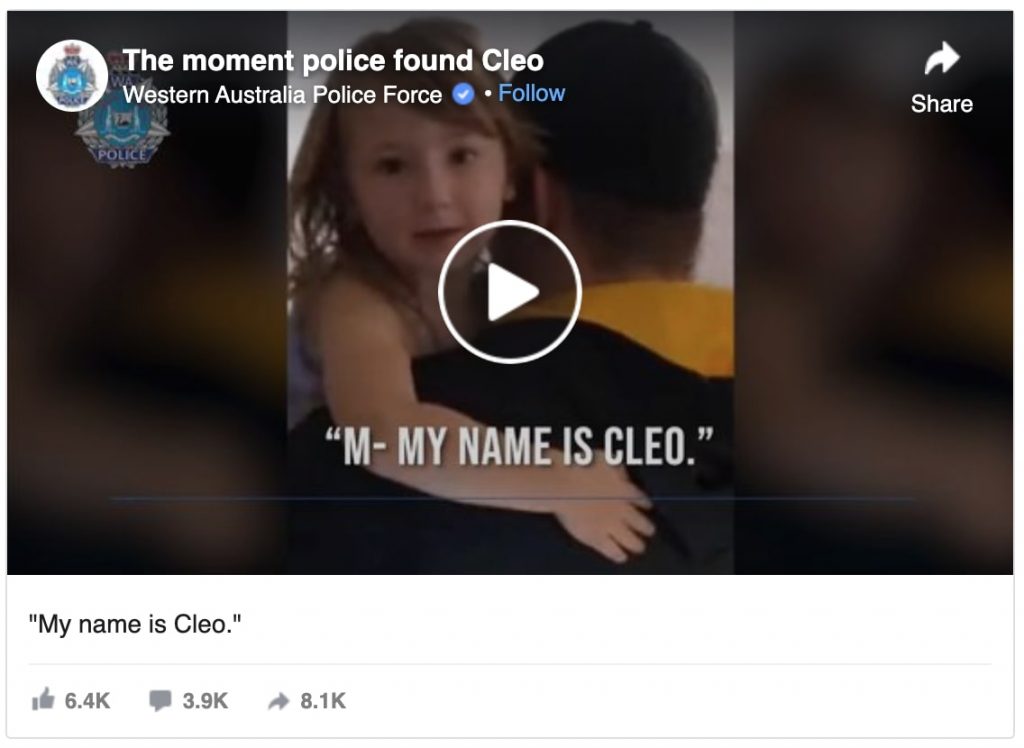 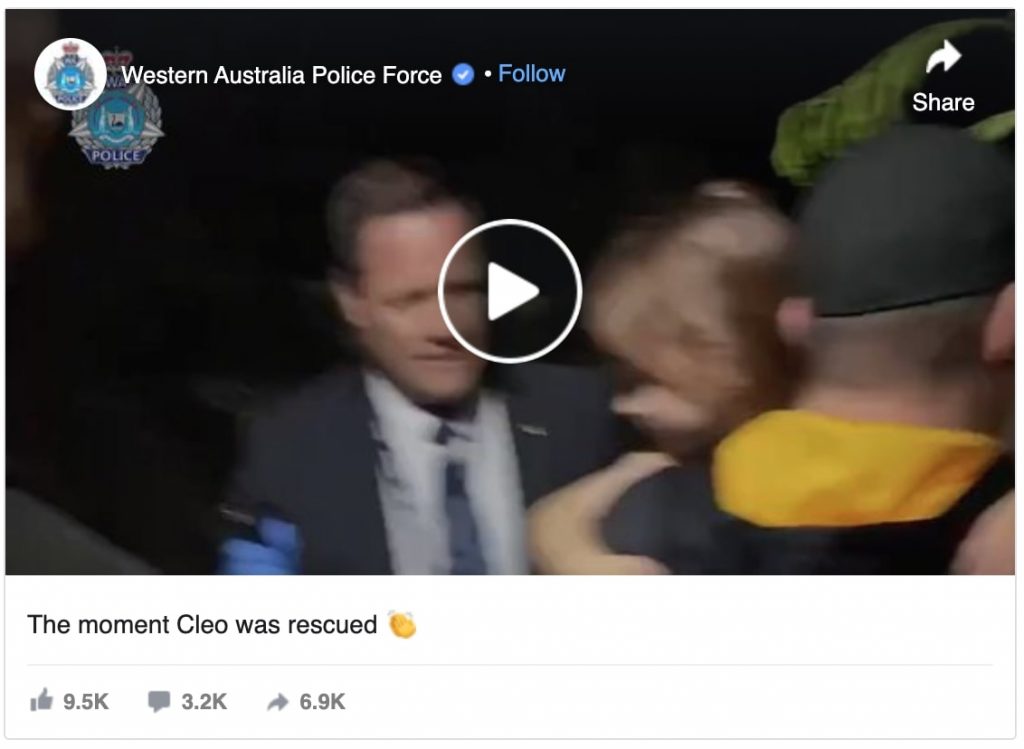 She had been missing for 18 days.

Cleo was reunited with her mother Ellie Smith and stepfather Jake Gliddon, who live in Carnarvon, a short time later.

“Our family is whole again,” Ellie posted on Instagram.

A 36-year-old man from Carnarvon has been charged over the alleged abduction.

WA Police said he has no link to the family.

“This is the outcome we all hoped and prayed for,” said WA Police Deputy Commissioner Col Blanch.

“This is the outcome we all hoped and prayed for,” – WA Police Deputy Commissioner Col Blanch.

“It’s the outcome we’ve achieved because of some incredible police work. I want to thank Cleo’s parents, the Western Australian community and the many volunteers.

“And of course, I want to thank my colleagues in the WA Police Force.” 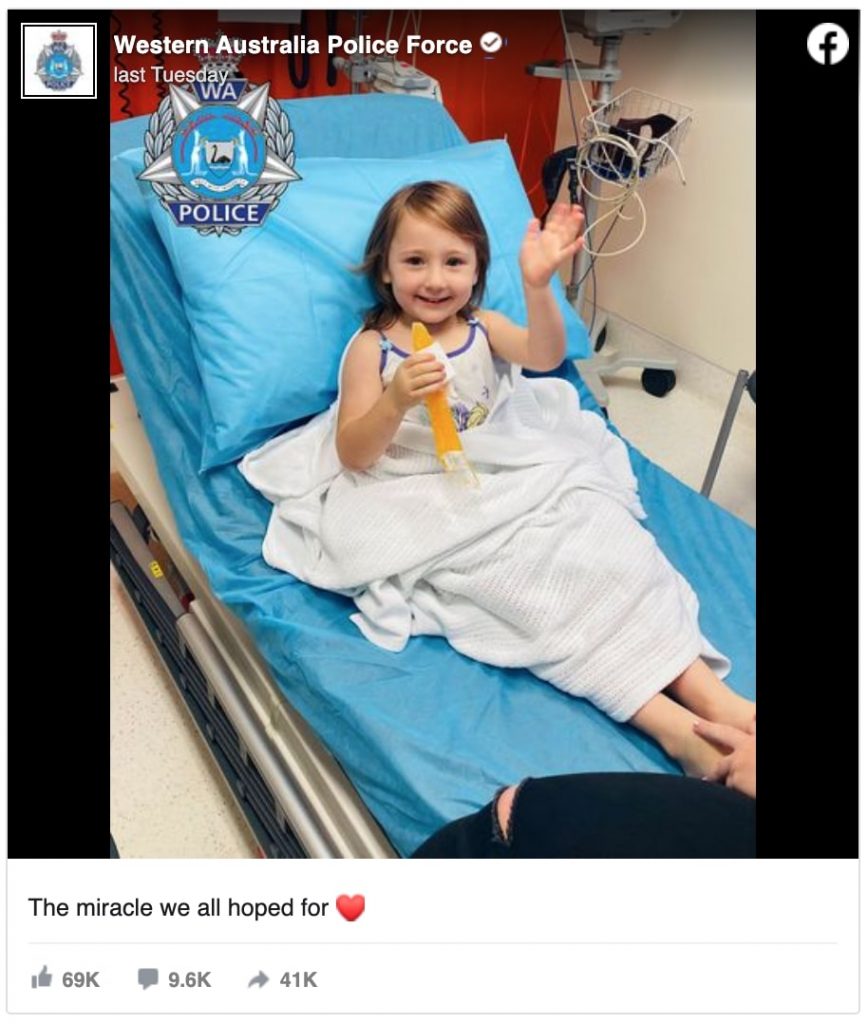 Cleo went missing in the early hours of October 16 while her family was camping at the remote Blowholes campsite, a 50-minute drive north of Carnarvon.

She had woken at 1.30am asking for a glass of water, and at 6am her parents woke to find their daughter gone. Her sleeping bag was also missing.

Detectives later revealed that Cleo had unlikely left the tent on her own because the zip was too high for the little girl to operate.

The WA government offered a $1 million dollar reward for any information that would lead to her whereabouts.

It is believed a tip off led police to the home in Carnarvon.

According to the ABC, a neighbour saw the occupant of the house bringing nappies home, which was deemed “odd”.

“There was some information we followed up on,” WA Police Commissioner Dawson told ABC Radio Perth.

“We’ve been following a lot of forensic leads, and it led us to a particular house.

“We’re still questioning the fellow, so it’s difficult for me to expand on it too much more.”

“We came out and we’ve seen detectives and one of the boys shouted and said, ‘Oh they’ve got a little girl there that might be Cleo,’” he said.

“That’s when we came out and saw a detective was holding her in his arms and put her in the back of the detective’s car.”

Commissioner Dawson said Cleo was doing well under the circumstances.

“Importantly they never gave up hope. To be able to reunite them with their daughter is such a wonderful thing.”

With balloons tied around trees and poles in her favourite colours, purple and pink, the town of Carnarvon welcomed little Cleo home with great joy.

“Look Before You Book”: A Stern Warning For Travellers