Older Australians Not Prepared for Their Future Age Care

Older Australians Not Prepared for Their Future Age Care

Older Australians desire to remain in their own homes for as long as possible and are prepared to pay for in-home care services to do so.

The study commissioned by Absolute Care & Health asked McCrindle to find out how prepared older Australians are for their future aged care needs. It surveyed 1,005 older Australians aged 50 and above and was representative of the national population by gender and state. The research was in field between 27 March to 3 April 2018 and focused on the preferences and aspirations of older Australians about their future age care; how they plan to fund it; their awareness of the services available and whether they have discussed their future care with anyone.

It is hoped the insights will generate conversations among older Australians and their families about what action they will take in preparation for their future care needs.

The study found that more than two in five older Australians have not discussed their future care with anyone (46%) and the largest proportion of those who have, have only discussed it with their family generally, not specifically (37%).

A similar proportion have not thought about how they might remain in their own home (42%) and of those who have (58%), only one in five have thought about it a lot (20%).

Putting off planning due to unrealistic expectations?

Three in four older Australians have not taken any steps to ensure they will receive their preferred future care (75%).

This begs the question of whether older Australians are putting off planning due to unrealistic expectations of aged care costs and expectations that government will largely foot the bill.

Furthermore, a large proportion plan to dip into their superannuation (41%) and cash savings (30%) though this does not necessarily correlate to having enough in the bank for the rest of their lives.

This may explain why two in five older Australians are not confident they (40%) or the government (43%) will be able to sufficiently fund their care needs. Moreover, less than one in ten (9%) have a secure financial or savings plan in place.

Nevertheless, what seems contrary to this lack of confidence is the fact that in the last 3 years many older Australians are still spending big on overseas holidays (46%), major assets such as a house, car or boat (30%), home renovations (28%) and even luxury consumer items (13%).

Staying at home is a priority for older Australians with three in four (74%) indicating they would likely use in-home care services and 82% are prepared to pay for these services to live in their own homes for longer.

It is not surprising then that the fastest growing sector within the care industry is in-home care, outperforming growth in residential care by five to one in the ten years between 2006 and 2016 (87% cf. 17%) according to the Australian Institute of Health and Welfare.

However, there is a need for more awareness that the government funds in-home care services as a third of older Australians (33%) are not aware of this. While nearly two in five (39%) are aware, they admittedly don’t know which services specifically are available.

Looking to the future

In 2048 it is predicted there will be 7.5 million Australians aged over 65, with average life expectancy approaching 90.

Meanwhile, the ratio of workers to retirees is declining, putting pressure on the economy and greater demands on the workforce.

Today, one in seven Australians are aged 65 and above and in 30 years’ time this figure is predicted to increase to one in five. By 2055, it is predicted there will be only 2.7 people of working age for every retiree, dropping from 4.5 in 2015.

This presents a challenge for all Australians, particularly policy makers and service providers. 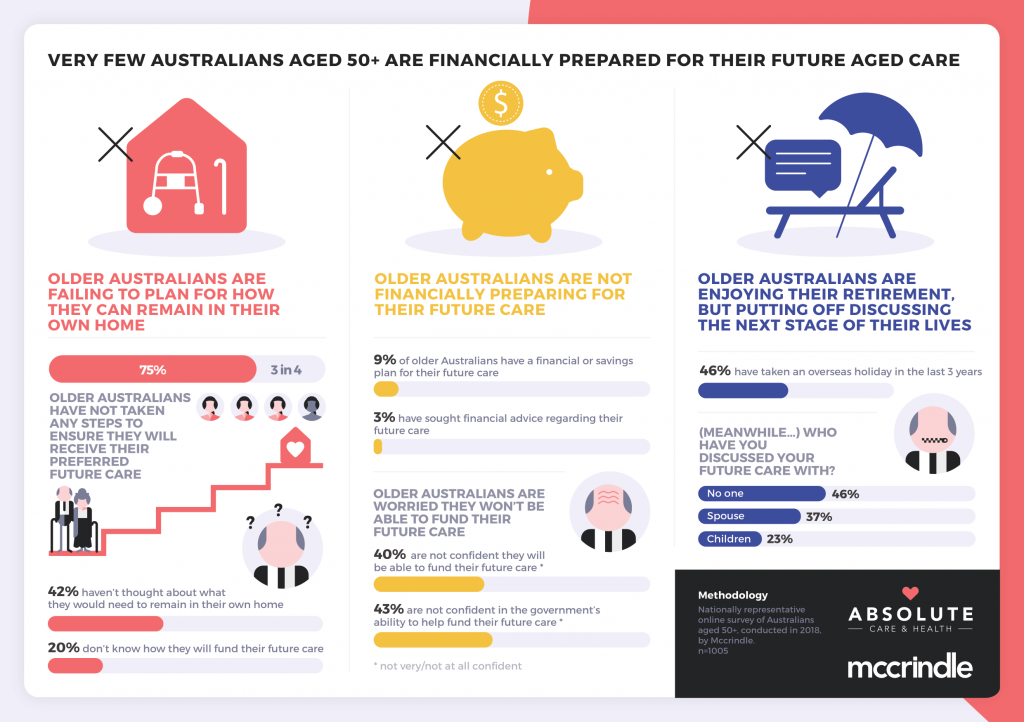 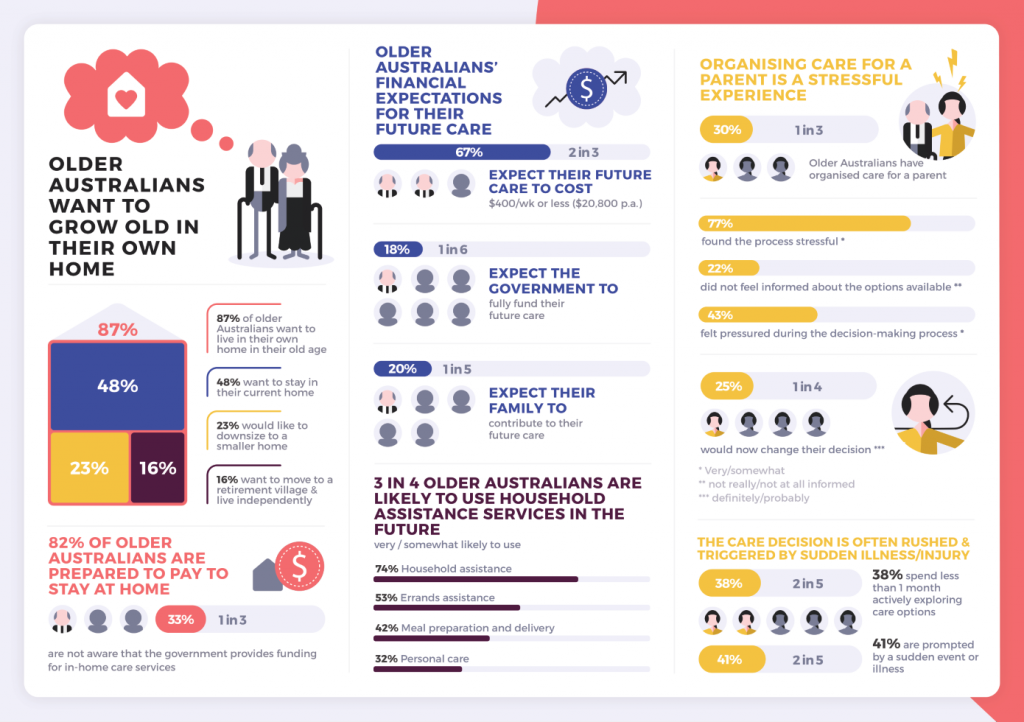