If the last two years didn’t already have you contemplating the urgency of life and the finite nature of our time on earth, Lin-Manuel Miranda’s directorial debut Tick, Tick… Boom! will do the trick.

Based on the one-man rock show penned by Rent creator Jonathan Larson, Tick, Tick… Boom! is a semi auto-biographical account of Larson’s life as he struggled to cut through in the musical theatre world, simultaneously burdened by his creative passions and the realities of adult life.

Plagued by what feels like the continual passing of his friends to HIV/AIDS – at a time when it really was a death sentence – Larson lives with an intense urgency, acutely aware of his own mortality and the need to create before it’s too late.

You wonder if Larson subconsciously knew he didn’t have long, as –theatre buffs will know – he died from a sudden aortic aneurism the night before Rent had its first Off Broadway preview performance.

It’s a tragic tale, but Tick, Tick… Boom! is story of inspiration and hope, and an ode to the man who director Lin-Manuel Miranda counts as a key influence in his own career.

In 2014, Miranda wrote in the New York Times, “[Rent] gave me permission to write about my community”.

“I grew up in a predominantly Spanish-speaking neighbourhood in Upper Manhattan that burst with music and characters, and Rent whispered to me, ‘Your stories are just as valid as the ones in the shows you’ve seen’.”

When he saw the Tick, Tick… Boom! stage show a few years later, Miranda said the show “grabbed the 21-year old me and refused to let go”.

So what was so admirable about Jonathan Larson?

Everyone will have their own takeaways, but one of the great challenges Larson fought through was whether to keep going with creative pursuits he truly loved, or find a “real job” like everyone else and accept his circumstance.

One of the great challenges Larson fought through was whether to keep going with creative pursuits he truly loved, or find a “real job”…

There’s a lot about a stable life that lured Larson – and maybe he was his own worst enemy for not embracing one – but fuelled by the brevity of life, he wasn’t willing to sacrifice what he knew would ultimately be fulfilling.

In a red carpet interview to Netflix, Miranda said Larson found himself at the crossroad where all your friends have “grown up” and gone on to the next stage of their lives, but you’re still hammering out the dreams of your youth. Larson had to decide whether he was happy to be the last one still trying to “make it happen”, or not.

Watching Tick, Tick… Boom! you can’t help but think of Psalm 90 where Moses asks God to teach us to number our days, that we might gain a heart of wisdom.

Perhaps that wisdom is not just about valuing each day and using them intentionally, but also about knowing just what to do with them: do we continue down the path of this dream, or is it time to pursue something else? Is this goal grounded in godliness, or am I being self-serving?

Tick, Tick… Boom!’s other strength, is in humanising the plight of those suffering with HIV/AIDS, and taking a group of people who were contextually ostracised and allowing them a voice.

Their storyline isn’t the central thread of the movie, but their experiences is a true reflection of the world Larson grew up in, and what informed his art.

Andrew Garfield also does an incredible job of bringing John Larson to life (that’s really him singing and playing piano), and while fans of musical theatre will love Tick, Tick… Boom!, ultimately, all of us can learn a thing or two from the life lessons it offers up.

Tick, Tick… Boom! is in cinemas and streaming on Netflix now and rated M. 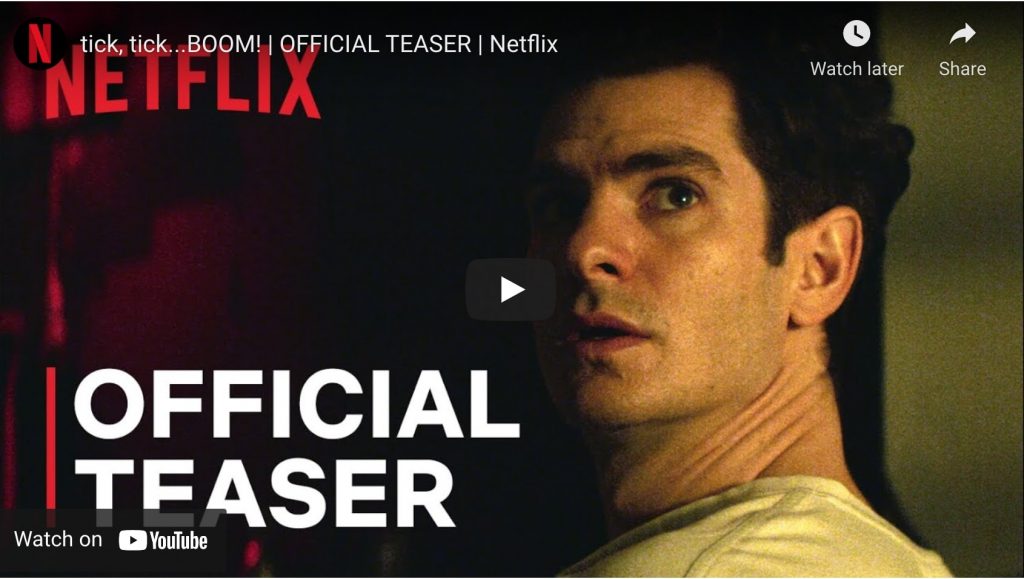