How COVID-19 is Likely to Affect Australia’s Population Forecast

The great thing about the pre-Christmas season, is that it’s totally OK for Australians to indulge in White Christmas fantasies, and watch reruns of the most cheesy “holiday content” with utter abandon.

One of the romantic comedies you’ll find this year that’s a little deeper than usual, though, is ‘Last Christmas’.

Emilia Clarke (Games of Thrones, Me Before You) plays Kate, an unlucky Londoner who’s whiling away her days working as an elf in a year-round Christmas shop. Her Yugoslavian mother Petra (Emma Thompson) hopes Kate will do more with her life, and when the dishy Tom (Henry Golding) ‘happens’ to walk into her life, it looks like things could finally turn around.

Last Christmas has all the hallmarks of your typical rom-com fare: a destined meet-cute between its leads, magical London backdrops, and an upbeat soundtrack set to the hits of George Michael—but goes far beyond the superficial.

Written by Emma Thompson (Nanny McPhee. Late Night) and her husband Greg Wise (Sense and Sensibility, Johnny English), Last Christmas was developed around Wham!’s holiday classic song of the same name. George Michael had approved the project before he died in 2016, and in her script Thompson intentionally gives time to causes he was passionate about, like helping the underprivileged and homeless.

“Emma is clever at highlighting all of these social aspects within her script”, said Henry Golding (Crazy Rich Asians), “…and the fact that sometimes [people] just need a chance and a helping hand. Everyone has their strengths and sometimes you just need somebody to shine that spotlight.”

A Portrait of a Britain in Pain

Kate’s family are Yugoslavia immigrants, and with the political changes, there’s a sense they’re no longer welcome in England. Her mother Petra is depressed because of it. Her Dad’s qualifications as a lawyer are invalid so he drives a mini cab, and Kate refuses to be called by her real name, ‘Katarina’.

This dynamic provides the background for Kate’s chaotic life and the laughs that ensue, but also adds to heart of what Last Christmas is about: the intrinsic connection between all of us, and our need to let down our walls and love one another well.

Emma Thompson said, “This story is about how to use your heart, how to live and how to love yourself. It’s also about how to take responsibility for yourself, which is not often achieved. Very few people achieve adulthood at the moment; we’re so intent upon being young all the time. That narcissism of our age is very clear.”

“He encourages Kate to find a new perspective… and invites her see how helping others is really key to us being ‘whole’ ourselves.”

Emelia Clarke adds, “It’s a love letter to anyone has ever felt confused or lost at times in their lives. It lends a hopeful message that it’s alright to feel this way and that you’ll soon come to know yourself.”

One of Last Christmas’ other real take-aways is Tom’s life motto: “look up”. He encourages Kate to find a new perspective on the world, and invites her see how helping others is really key to us being ‘whole’ ourselves.

Director Paul Feig (Ghostbusters, Bridesmaids) said, “I’m as guilty as anyone else for staring at my phone all day. But sometimes when you look around…and hear the problems that are going on, [that make it feel like] people aren’t connecting or observing each other, you think, ‘Look up, look around’. We have this whole wonderful world around us; why are we filtering it through one window that’s telling us what to think? 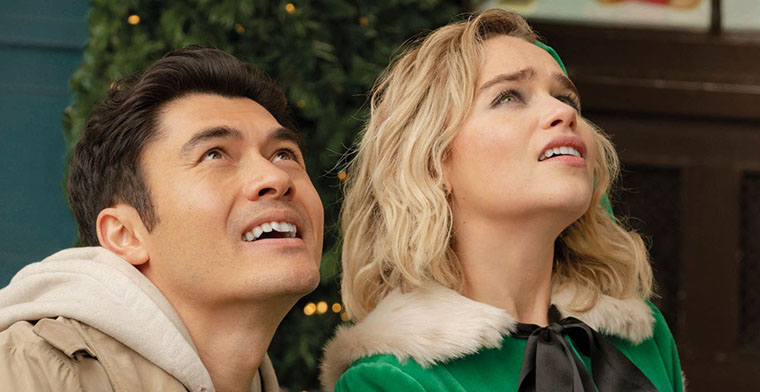 Last Christmas may not mention the ‘reason for the season’ – save for some horrifyingly gaudy nativity trinkets – but encourages an attitude toward life that is sacrificial, loving, and values what a gift life really is.

Last Christmas is in cinemas now.

tags: Articles christmas hope 103.2 movie movie review
0
previous U2 – The Greatest Christian Band That Never Was
next What Was Your Favourite ACCTV Movie For 2019?
Related Posts

‘Trolls: World Tour’ is the Feel-Good-Glitter-Hype Your Family Needs this Year