It was an explosive article in Charisma News in June 2019 that first outed the internationally loved Christian comedian John Crist, for serially harassing and sexually pursuing women at the height of his fame.

The article detailed how Crist had “exploited his Christian reputation and platform to harass, manipulate and exploit young women over the last seven years”, with several sources interviewed as part of the investigation. Many of the women he pursued were married or in relationships.

At the time, the internet star — famous for his satire-laden videos making fun of Christian culture — issued a written apology, published in full by Charisma. In it, Crist admitted to his guilt and shame, his “destructive and sinful” behaviour, the hurt he had caused, and his violation of “his own Christian beliefs, convictions and values”.

“Over several recent years, I have privately sought and received regular professional treatment for my sexual sin and addiction struggles,” he wrote. “I’m committed to getting healing and freedom from my sin and have decided to cancel my remaining tour dates this year and to postpone all future commitments in order to devote all my time and energy on getting healthy spiritually, mentally and physically.” 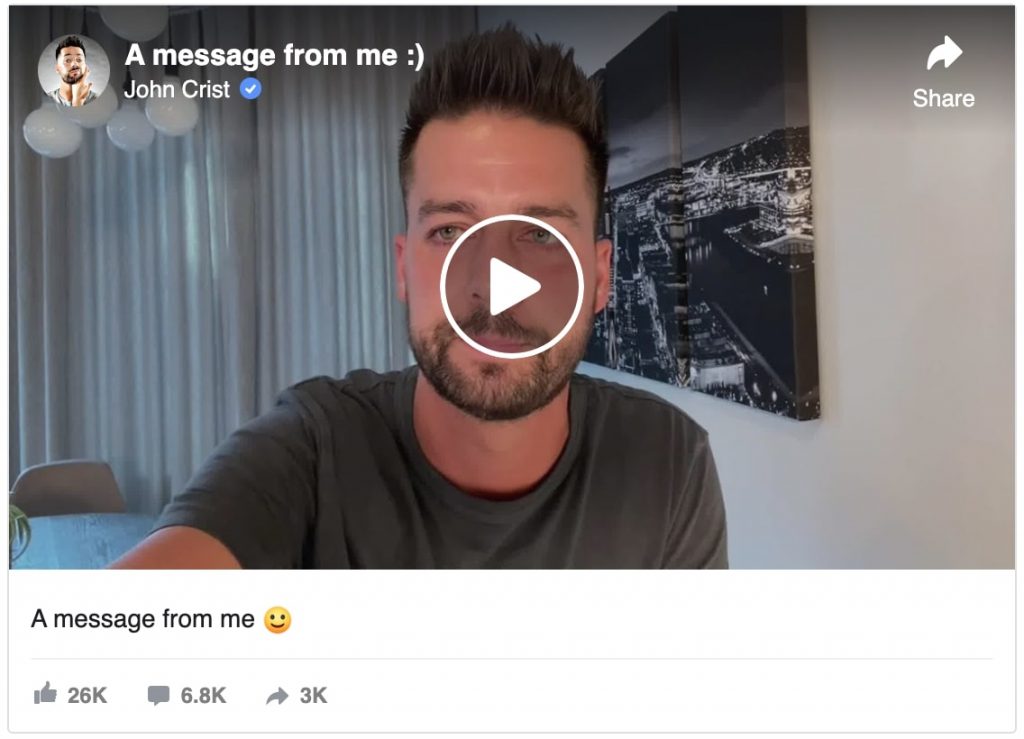 Despite his admission last year, Crist continued posting comic memes over the next four months — but in November he went silent, shutting down his social accounts.

Now, he is ‘back’, with his first post in a little over eight months.

In the video, posted on Facebook and Instagram, Crist speaks of four months spent in a “treatment facility”, he thanks his fans for their support during his recovery, and admits his failure and deep hypocrisy.

“Thank you for the love and care and support that you guys have shown me… not necessarily support for choices I’ve made in my personal life, but support for me as a human being and as a person,” he says. “It has meant the world.

“I was in a treatment facility… and my sister would just send me letters … people caring for me, concerned about me, praying for me, wishing for my restoration and healing.

He speaks of being surprised that Christians showed him kindness and grace.

“I had assumed that I lived in a community of people that would be the first to look down on me and judge me and point fingers at me, and I’ve felt nothing but the opposite throughout this whole process,” he said.

“Let me just say how hopeful and encouraging that was.”

“All my comedy videos were pointing out hypocrisy in a lot of ways… and perhaps the most embarrassing part of this whole thing, is that the biggest hypocrite… was me.”

“I make a living — all my comedy videos were pointing out hypocrisy in a lot of ways… and perhaps the most embarrassing part of this whole thing, is that the biggest hypocrite in all this, was me.

“I was portraying a person on the internet, that I was not behaving like, privately.”

No Longer Defending Himself

Crist admits that when he was first exposed, he tried to “justify and rationalise and minimise, and kind of explain and defend myself”.

Eight months on, he says he owns his harmful behaviour, and now wants to use his platform to make a difference.

“I had a problem, and I needed to get some help,” he said. “That’s what I’ve been doing for the last 8 months and that’s what I will continue to do, to put a priority on my own mental health,” Crist said.

“Obviously there’s been a million times in the last eight months that I wanted to jump on the internet and make video or make a joke or an Instagram story, but I knew that if I didn’t take the time to fix the broken pieces of myself, then I wasn’t going to be good for anybody.

“I think, if I can look you in the eye and tell you that I’m part of the problem, then I can also be a part of the solution.

Support From Friends and Followers 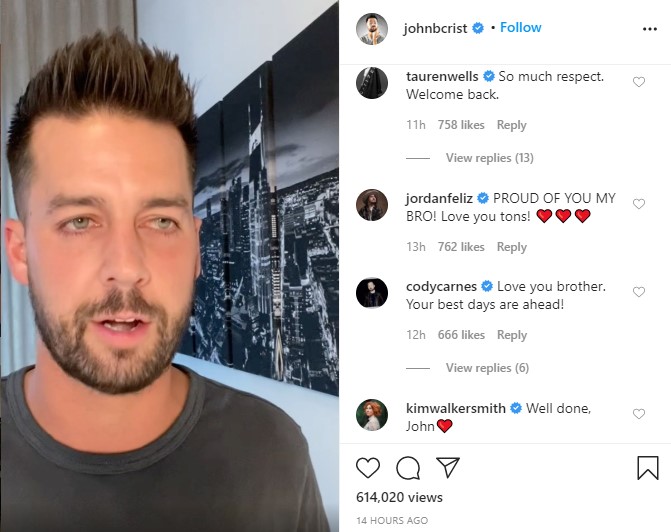 Comments on Crist’s video have been largely positive — including several from high profile Christian artists and pastors such as Chad Veach, Tauren Wells, Kim Walker Smith, Cody Carnes, and Cory Asbury, who is well known for his public online banter with the comedian.

Fans, too, have been quick to show their support.

Aaron Comer: “Coming from someone who is in recovery ministry, I appreciate the transparency… “

Jackie Smith: “Thank you John, your message really helped me this morning. My husband and I have been struggling with drinking to excess since this pandemic/lock down. Your message and humility gave me strength and encouragement to deal with it… We will keep you in our prayers.”

Lisa Kitzmiller: “Ownership is rare these days. It’s hard, but true growth and change comes from it. Cheering you on for your continued healing! Looking forward to your comedy in the near future!”

“It is great to see you recovering and to see the support you are receiving. I pray you continue down this path.”

Jason Bragdon: “In the past we Christians have been quick to eat our own when they fail. Forgetting that we all fail. It is great to see you recovering and to see the support you are receiving. I pray you continue down this path and I hope to see you making us all laugh again soon.”

Jason Walsh: “I love the humility in this video. Anyone watching it with judgement in their heart should probably watch out for the plank in their eye. I don’t know exactly what it would look like to bring that humility into your comedy, but I look forward to seeing you try.”

Matthew Roefer: “I am praying for the Lord to continually restore you and heal the brokenness (we all have it!). Put strong boundaries in place, get accountability partners, mentors and re-evaluate how you are doing each quarter. Blessings brother in Christ, it’s a breathe of fresh air seeing your face again.”

Not Everyone is Convinced

But not all responses have been so forgiving, with some people questioning him speaking so soon about his problem in the past tense.

Jana Mills – “I for one am glad that he is admitting and owning up to his actions. But it would be nice had he mentioned more about the victims and use this to advocate for other victims out there.”

Kyle Coble – “There wasn’t really an apology to the people he hurt anywhere in the video. I like John and I’m so glad to see him back, but I don’t think I’m the only one that thinks an ‘I’m sorry for my behavior’ is appropriate in this situation.”

Melissa Cubing – “He talked more about hurting himself than hurting other people in this video. This is disappointing, but also not surprising. Thank you for speaking up.”

“You never once thanked God… I would suggest that possibly there is some more that you need to learn… I will pray for you.”

Robert Esposito – “My only comment is that you kept saying how you healed yourself and you needed to work on yourself. You never once thanked God or talked about how only through God could you have been put back together. I would suggest that possibly there is some more that you need to learn…. I will pray for you.”

JeneeMarie12 – “@taurenwells Would you still have respect for him if it was your wife or your daughter he hurt then chalked up their life-altering assault as a ‘poor choice’?”

Loretta Salgado: “What a non apology! Please, stay gone Jon. Still praying for you and you certainly don’t need my forgiveness (or owe it to me) , but this is a classic case of how not to apologize.”

Renae Moffatt: “Still skeptical. I mean good for him, but… the people affected by an addict do not owe them anything… he needs to know how much being a predator regardless of recovery affects people.”

tags: Articles hope 103.2
0
previous Bringing Music and Joy to Australia’s Remote Indigenous Kids: “Instruments for the Outback”
next Australians are Live-Streaming Child Sex Abuse. Joy Was One of Those Children. Now, She’s Speaking Out.
Related Posts