Home News How Could This Happen Again? Reflection on Hillsong’s Carl Lentz ‘Fall From Grace’

“Our time at Hillsong NYC has come to an end. This has been a hard ending to what has been the most amazing, impacting and special chapter of…”

This was the first post I saw on Instagram that day – from Hillsong East Coast’s lead pastor Carl Lentz.

Before I clicked to see more, I got that sad, familiar feeling that something had gone awry. I just knew the moment I invited the next series of words onto my screen I’d be exposed to what we’ve seen far too many times before: the news of a widely known Christian leader slipping up and ‘falling from grace’.

Sure enough, and as you may have heard over the weekend, those words detailed Carl’s unfaithfulness in his marriage and how he’d made “choices that have real and painful consequences” because he “did not do an adequate job of protecting [his] own spirit, refilling [his] own soul and reaching out for the readily available help that is available”.

Hillsong founding pastors Brian and Bobbie Houston fired him from his role, and in their own statement to the church’s East Coast attendees, Brian said, “This action has been taken following ongoing discussions in relation to leadership issues and breaches of trust, plus a recent revelation of moral failures”.

They also mentioned their personal difficulty in having to make the choice, with Brian continuing, “While I have no doubt that this is the right course of action, I must mention Bobbie’s and my personal sadness, as we have known Laura (Carl’s wife) her entire life and Carl for well over 20 years”.

In those 20 years, Carl Lentz attended Hillsong’s International Leadership College in Australia where he met his wife Laura, and went on to found the megachurch’s first New York City location in 2010 with Brian and Bobbie’s eldest son Joel.

The growth of the New York locations and subsequent East Coast campuses elevated the global recognition of Hillsong’s cultural impact.

By inadvertently drawing the celebrity attendees residing in their locale, the church went from being the one Australians knew as the ‘money hungry mob’ from A Current Affair tax-dodge stories, to one that – while not everyone’s cup of tea – may have some merit and could be doing some good in the world. 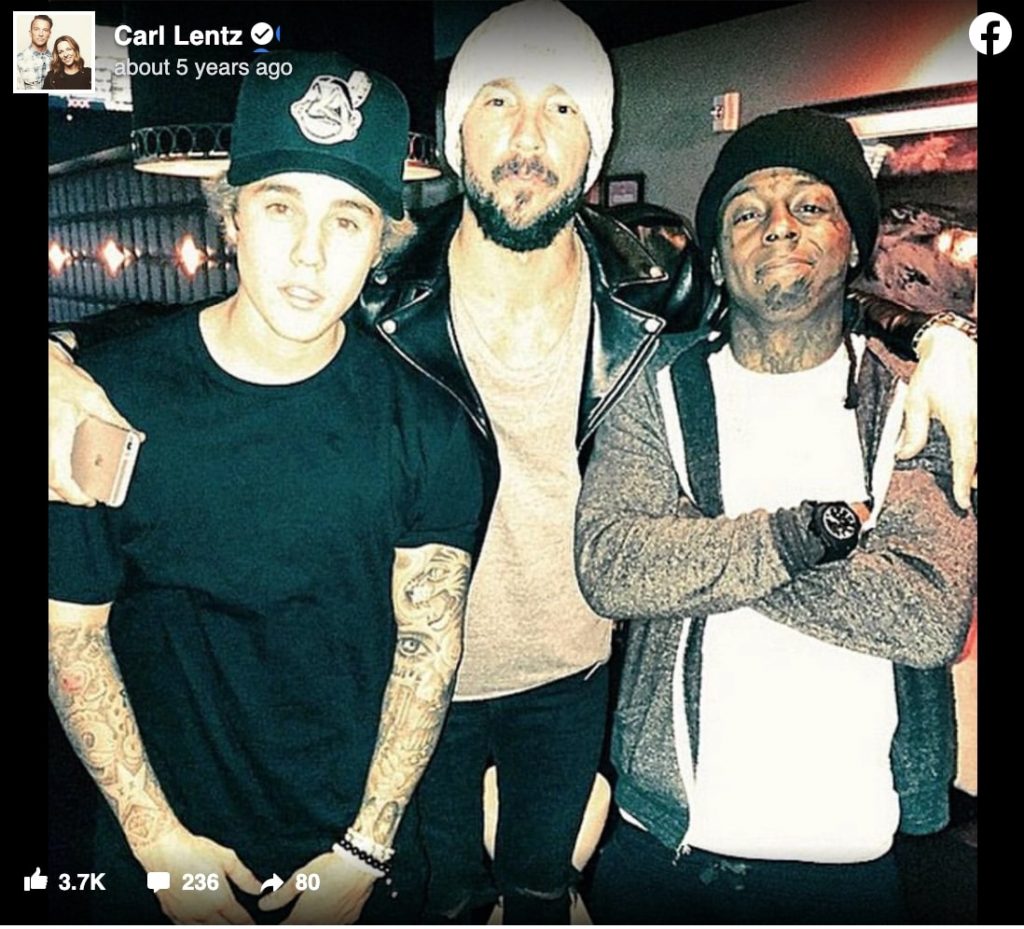 Carl himself hugely shaped the messaging coming from the Christian world about racial division and inequality in America, sparking debate in 2016 when he refused to say “All lives matter” after the shooting of two black men at the hands of police in the United States.

At THIS church, we are not saying ‘all lives matter’ right now because this is a logical assumption that most reasonable people agree with. All lives are not at risk right now. We ARE saying BLACK LIVES MATTER. Because, right now, black lives apparently are worth LESS on our streets. It’s ‘our fight’ not ‘their fight.

He subsequently added, “we hear the frustration, we empathise with the frustration and we will continue to stand with people that are hurting” – something Carl continued to do well into 2020 as the Black Lives Matter movement gained momentum again after the death of George Floyd and Breonna Taylor.

That though, doesn’t mitigate the pain and confusion churchgoers feel when a leader they looked up to reveals deep hidden flaws.

Continuing my scroll, I saw that news of Carl’s firing was circulating across a number of accounts I follow. The comment-count was steadily rising and so too Carl’s followers – jumping from 678K to 681K within minutes (standing at 691K at the time of writing). People weren’t ditching this guy, they were leaning in to the drama.

The majority of the comments – a function that’s now inactive on the post – were ones of sorrow and support. Other famous faces in the Christian sphere offered their prayer, grace and encouragement to Carl to do the hard work of re-earning trust with his wife and family.

In the since-hidden comments, Christian comedian John Crist and singer Israel Houghton, who have both had their bouts with disgrace, acknowledged the bravery in Carl’s admission (sharing details his pastors had respectfully not disclosed), and Israel said he’d show Carl the support he’d been offered when his own marriage was breaking down.

Regular church attendees thanked Carl for life-changing moments they’d experienced in his services, for how he’d led them to Christ and the way he’d contributed to the social and cultural issues of this day. They thanked him for lending an ear to people who previously felt unwelcome in the church.

And of course, there were ones of great anger and frustration. People fed up with the failures of church, furious that someone who’d caused hurt and “abused” others would be prayed for and seemingly coddled by his fans. There were back-and-forths about the unrelenting hypocrisy of preachers and how this revelation was the last straw – “I’m done with Christianity”.

If you extend the search to Laura Lentz’s and Hillsong East Coast’s Instagram accounts, it’s a mix of cries for Laura to dump the guy, “as is [her] Biblical right”, and to not “look back over their marriage and try to work out want went wrong, because none of it’s [her] fault”. Some church members also cried out for more information, asking if they’re now just supposed to pretend Carl never existed since services continued as per usual on Sunday gone.

At this point I decided my socials scrolling was done. I’d come away with a gauge of the surprisingly considerate responses to Carl’s firing and the reasons for it, and a taste of the pain people were feeling who’d been disappointed by his actions.

What has gone wrong for this to happen again?

What I’d also personally been pondering was how could this happen… again?

What has gone wrong? Why are we seeing news of yet another church leader succumbing to marital unfaithfulness? One who had so much richness in his life and a fierce steadfast commitment to Jesus and the church? Who is around him that didn’t clock to the issues sooner? Why didn’t he feel he could ask for the support he knew was there?

The feelings the Christian community experience at a time like this are nuanced and complicated. Not only is there a reaction to the leader themselves, but also to how they’ve tarnished the reputation of God and church in the eyes of the world. How, in various ways, we’re all been pulled down with them as yet again, Christ-followers get a bad wrap and the eyes start rolling.

That though, is where we need to check ourselves: is it Christ we’ve been following or the leaders we admire? Are we so caught up in our own reputation we forsake the well-being of individuals, preferring cracks be kept glued up so no one sees Christians can experience turmoil?

So far, my thoughts have landed at a perception of pastors we need to address.

Though some may rise to celebrity status, and some may be more ‘seen’ than others, we need to remember they are not celebrities. Whether in arenas or corner congregations, they are not the self-help gurus we can turn them into or that some of them may wish they were.

While a Christian preachers message is infallible, they are not infallible.

I’m not suggesting the standards we expect of leadership drop or that there shouldn’t be accountability when wrongdoing occurs, it’s just that we shouldn’t be so shocked when one of them stumbles.

Somehow we’ve acquired the belief that if you hold a position of leadership in church or if you’re a career preacher, you’re someone who’s getting the Christian life right – that you’re getting to preach the gospel because you’ve perfected the art of living out that gospel. But it’s just not true.

Preachers are the broken, pointing fellow ‘brokens’ to the one who heals.

They too are in need of that healing, and while they may be good at talking about Jesus and the life-giving truths He offers, they are not Jesus. And they’re also learning to live out those same truths; they’re not talking about the target they’ve hit but the one all of us are aiming for.

All Christian’s are hypocritical. We all believe in, and preach about a way of life we will never fully attain in this life and that we’ve already contradicted and messed up daily. But that doesn’t disqualify us from the pursuit of Christ-likeness. If it did, we may as well mute all the mics now.

In 2 Corinthians 5:20 we’re all called to be, “Christ’s ambassadors” and in Matthew 28:19 we’re all told to, “go and make disciples of all nations”. All of us. Not just the good-looking ones, or the well-spoken ones and the ones with a seemingly perfect track record – everyone.

That’s going to mean there are failures and mistakes and that there are people keeping secrets who also say, ‘love your neighbour’. What we need to work out is how to listen to our leaders as if sitting shoulder to shoulder to them, not at their feet looking up.

And, if you want to be a career pastor be sure that your influence doesn’t outweigh your discipline.

We can’t make any judgements about Carl’s situation being so far removed – even closeness doesn’t give you that right, but he himself said he “led out of an empty place” and “did not do an adequate job of protecting [his] own spirit, refilling [his] own soul and reaching out for the readily available help that is available”.

When we see a leader stumble, we can easily say, ‘shouldn’t their faith in Jesus have stopped them from doing that?’ Maybe so, but oftentimes with such a fall, comes an admission that that relationship wasn’t where it should’ve been.

Particularly for Christian leaders of note, the momentum of their daily lives creates an ecosystem of its own that doesn’t require much tending for them to roll on writing the books, taking the speaking gigs and all the while ignoring the quiet pangs of discomfort until they’re almighty loud ones.

Whether you sit on the side of the onlooker or the leader facing failure, one thing we all need to remember is that when we do fall from grace, it’s also the very thing that catches us. As we admit our faults, and walk out the rocky road of forgiveness and consequence, that infallible message we declared is the very thing we can turn to.

tags: Articles failure faith grace hillsong hope 103.2
0
previous 2020 COVID Fashion Report – Does Your Favourite Brand Make the Grade?
next Do You Have O+ or A+ Blood? Other Aussies Desperately Need Your Help!
Related Posts

“We Had to Accept the Unacceptable”