When Ravi Zacharias was a cricket-loving boy on the streets of India, his mother called him in to meet the local sari-seller-turned-palm reader.

“Looking at your future, Ravi Baba, you will not travel far or very much in your life,” he declared. “That’s what the lines on your hand tell me. There is no future for you abroad.”

By the time a 37-year-old Zacharias preached, at the invitation of Billy Graham, to the inaugural International Conference for Itinerant Evangelists in Amsterdam in 1983, he was on his way to becoming one of the foremost defenders of Christianity’s intellectual credibility. A year later, he founded Ravi Zacharias International Ministries (RZIM), with the mission of “helping the thinker believe, and the believer think.”

In the time between the sari seller’s prediction and the founding of RZIM, Zacharias had immigrated to Canada, taken the gospel across North America, prayed with military prisoners in Vietnam, and ministered to students in a Cambodia on the brink of collapse. He had also undertaken a global preaching trip as a newly licensed minister with The Christian and Missionary Alliance, along with his wife, Margie and eldest daughter, Sarah. This trip started in England, worked eastwards through Europe and the Middle East and finished on the Pacific Rim. All-in-all that year, Zacharias preached nearly 600 times in over a dozen countries.

It was the culmination of a remarkable transformation set in motion when Zacharias, recovering in a Delhi hospital from a suicide attempt at age 17, read the words of Jesus recorded in the Bible by the apostle John: “Because I live, you will also live.” In response, Zacharias surrendered his life to Christ and offered up a prayer that if he emerged from the hospital, he would leave no stone unturned in his pursuit of truth.

Once Zacharias found the truth of the gospel, his passion for sharing it burned bright until the very end. Even as he returned home [two weeks ago] from the hospital in Texas, where he had been undergoing chemotherapy, Zacharias was sharing the hope of Jesus to the three nurses who tucked him into his transport.

A Heart for Those With Tough Questions

Frederick Antony Ravi Kumar Zacharias was born in Madras, now Chennai, in 1946, in the shadow of the resting place of the apostle Thomas, known to the world as the “Doubter” but to Zacharias as the “Great Questioner.”

Zacharias’s affinity with Thomas meant he was always more interested in the questioner than the question itself.

His mother, Isabella, was a teacher. His father, Oscar, who was studying labor relations at the University of Nottingham in England when Zacharias was born, rose through the ranks of the Indian civil service throughout Zacharias’s adolescence.

An unremarkable student, Zacharias was more interested in cricket than books, until his encounter with the gospel in that hospital bed. Nevertheless, a bold, radical faith ran in his genes.

“Ravi Zacharias saw the Lord’s hand at work in his family’s tapestry and he infused RZIM with the same transgenerational and transcultural heart for the gospel.”

Zacharias’s great-great-great-grandmother shocked her Nambudiri family, the highest caste of the Hindu priesthood, by converting to Christianity. With conversion came a new surname, Zacharias, and a new path that started her descendants on a road to the Christian faith.

Ravi Zacharias saw the Lord’s hand at work in his family’s tapestry and he infused RZIM with the same transgenerational and transcultural heart for the gospel.

He created a ministry that transcended his personality, where every speaker, whatever their background, presented the truth in the context of the contemporary. Zacharias believed if you achieved that, your message would always be necessary.

Now there are nearly 100 gifted speakers who on any given night can be found sharing the gospel at events across the globe; where once it was run from Zacharias’s home, now the ministry has a presence in 15 countries on five continents

Influencer of the Evangelists 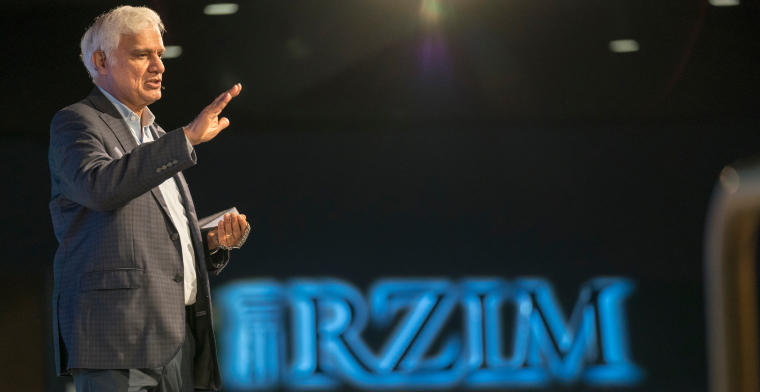 In 1983, Billy Graham invited Zacharias to speak at his inaugural International Conference for Itinerant Evangelists in Amsterdam.

In front of 3,800 evangelists from 133 countries, Zacharias [shared a] message, which received a mid-talk ovation, about the need to be sensitive to your audience: “when you are trying to reach someone, please be sensitive to what he holds valuable.”

As one colleague has expressed, “He saw the objections and questions of others not as something to be rebuffed, but as a cry of the heart that had to be answered. People weren’t logical problems waiting to be solved; they were people who needed the person of Christ.”

Meeting the thinker face-to-face was an intrinsic part of Zacharias’s ministry, with post-event Q&A sessions often lasting long into the night.

Not to be quelled in the sharing of the gospel, Zacharias also took to the airwaves in the 1980s. Many people, not just in the U.S. but across the world, came to hear the message of Christ for the first time through Zacharias’s radio program, Let My People Think. In weekly half-hour slots, Zacharias explored issues such as the credibility of the Christian message and the Bible, the weakness of modern intellectual movements, and the uniqueness of Jesus Christ.

Today, Let My People Think is syndicated to over 2,000 stations in 32 countries and has also been downloaded 15.6 million times as a podcast over the last year.

His 28 books – including The Logic of God, Seeing Jesus from the East, Can Man Live Without God?, Jesus Among Other Gods and The Grand Weaver – have sold hundreds of thousands of copies worldwide and have been translated into over a dozen languages. And he has received 10 honorary doctorates in recognition of his public commitment to Christian thought.

With a passion to train evangelists undergirded with apologetics, Ravi founded OCCA, the Oxford Centre for Christian Apologetics.

With teachers like John Lennox, Alastair McGrath and Os Guinness, OCCA has to date trained over 400 students from 50 countries who have gone on to carry the gospel in many arenas across the world.

Some have continued to follow an explicit calling as evangelists and apologists in Christian settings, and many others have gone on to take up roles in each of the spheres of influence Zacharias always dreamed of reaching: the arts, academia, business, media and politics.

In 2017, another apologetics training facility, the Zacharias Institute, was established at the ministry’s headquarters in Atlanta, to continue the work of equipping all who desire to effectively share the gospel and answer the common objections to Christianity with gentleness and respect.

In 2014, the same heart lay behind the creation of the RZIM Academy, an online apologetics training curriculum. Across 140 countries, the Academy’s courses have been accessed by thousands in multiple languages.

In the same year OCCA was founded, Zacharias launched Wellspring International, the humanitarian division of the ministry. Wellspring International was shaped by the memory of his mother’s heart to work with the destitute and is led by his daughter Naomi. Founded on the principle that love is the most powerful apologetic, it exists to come alongside local partners that meet critical needs of vulnerable women and children around the world.

Ministering in the Darkest Places

There he walked through Death Row – a place Zacharias believed the gospel shined with grace and power.

Such was his deep connection there, the inmates have made Zacharias the coffin in which he will be buried. As he writes in Seeing Jesus from the East, “These prisoners know that this world is not their home and that no coffin could ever be their final destination. Jesus assured us of that.”

About the Author: Matthew Fearon is the UK content manager of Ravi Zacharias International Ministries (RZIM) and former journalist with The Sunday Times of London. RZIM, founded in 1984, brings the gospel of Jesus Christ to millions around the world, with an aim touch both the heart and the intellect of the thinkers and influencers in society by tackling some of the toughest questions about faith and providing thoughtful answers. Find out more at RZIM.org.