Mac Powell has been a mainstay of the Christian music industry for over three decades. First as the co-founder and front man of Christian rock band Third Day, then as a solo artist releasing two country albums, and now with his first Christian solo project, New Creation.

In all that time, Mac said there’s still so much of life he’s “yet to work out” and a lot of it he believes he “never will”.

“As a ‘veteran’ songwriter who’s been around for a long time, I’ve realised [this] about almost every thing in life: you’re never going to figure it out,” he said.

“But I’ll never stop trying. [There’s joy] in the process of that.” 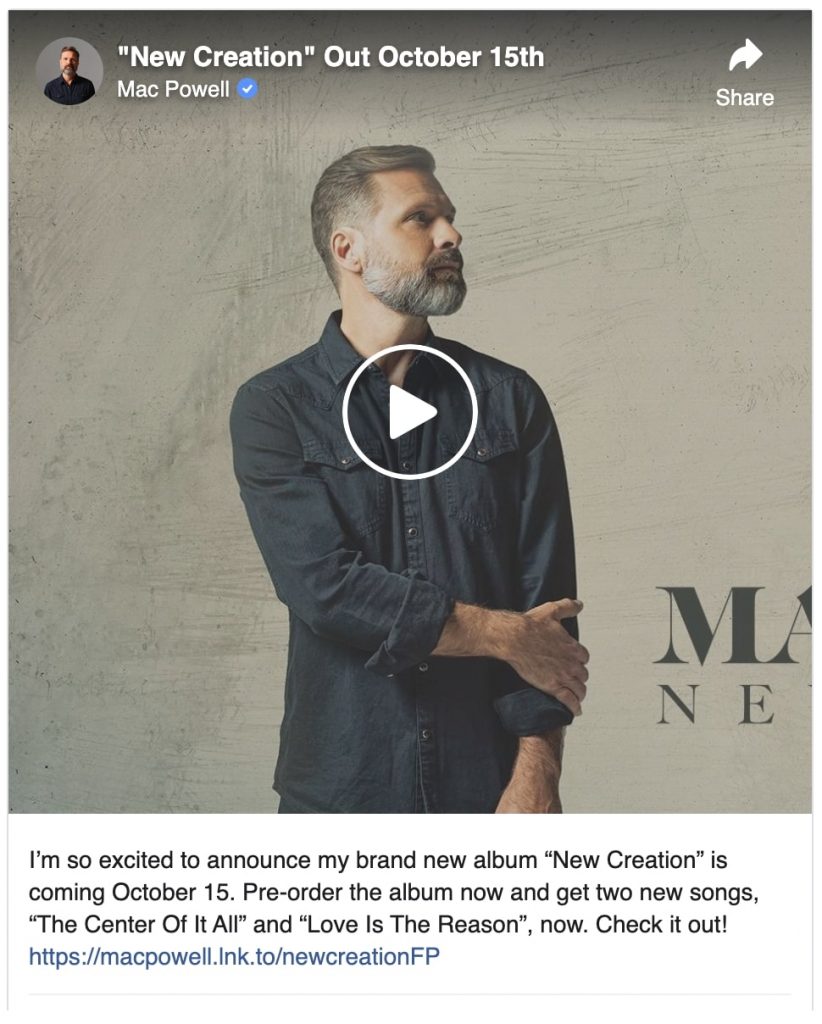 So what are the ideas Mac wrestles with, and the discoveries he wants to help listeners make through his music?

“There’s a lot of seasons in life where you have different things you want to share, but overall for me, the umbrella of the message is one, about my faith,” Mac said.

“The second, underneath that umbrella message of faith, is living an abundant life.

“Jesus said, ‘I have come into this world to give you life, and life abundantly’ (John 10:10), and I think so often people in general – whether they’re believers of not – miss out on this abundant, and ‘more’ of real life, because we get caught up in other things.

“The reason I know that message is because I missed out on so much of what I could have through my faith, I settled for less. And I don’t want people to settle for less, because you don’t have to. God has so much for us.”

“I don’t want people to settle for less, because you don’t have to. God has so much for us,” – Mac Powell

What Mac’s describing, when he talks about settling verse embracing all God has for us in life, is the difference between a faith that stops at receiving salvation through Jesus and one that digs into the scriptures and applies them to our lives.

It’s the difference between making a “surrendered heart connection” to God, and your belief in Him being a simple religious act.

“I made a confession of faith at an early age and I meant it,” Mac said.

“I really believed the truth of the gospel but it didn’t really change my life.

“I wasn’t [mentored], I didn’t really grow in my faith. I just remained, as I call it, a ‘baby Christian’ for a long time.”

To get out of that rut, Mac adopted what he refers to as his “three medicines”: a series of must-have daily markers that lay the foundation for his spiritual and social wellbeing.

“One is the scriptures, the Bible,” Mac said.

“One is God’s Holy Spirit – and you really receive that through prayer, and seeking Him through prayer and listening for him – and the third thing is the body of Christ, the church.

“When I’m in communion with those three things: the Word, the Spirit and the church, I’m a different person. In a good way, in a better way.”

While Mac has enjoyed a long career doing what he loves and connecting fans to faith, he credits his parents’ love of music for setting him on the path that led to the platform he now has.

Playing records from Creedence Clearwater Revival to Bruce Springsteen and beyond, Mac said, “My parents both play guitar and sing [and] I was always around music”.

“If I had not had that foundation of my parents at home and singing all the time, singing around a campfire… that was a big part of life,” he said.

“As I got a bit older [I realised] not everybody’s parents do this, or are talented like this. Music was a great gift that was given to me at an early age.”

Thinking about the music he’s gifted the world with, and how what he writes now as a solo artist compares to his work with Third Day Mac said New Creation “is probably more of who I am, because in a band there’s compromise”.

“Sometimes that makes it better, and sometimes it makes it not the way you wanted it to come out,” he said.

“Because [New Creation] is a solo thing, I think it makes it more of who I am than anything I’ve done in the past.”

Mac said the freedom “feels great but it’s a little scary too”.