An Englishman wants to build a wall – not a barrier to keep people out, but a symbol of hope for all.

Last year, Richard Gamble, the former chaplain of the English Premier League’s Leicester City Football Club, was granted permission to build a colossal monument on the outskirts of Birmingham, England.

The Eternal Wall of Answered Prayer will be constructed using a million bricks, each representing a person’s prayer and its outcome, and will be shaped like a Möbius strip (or infinity symbol).

The public work of art will stand at 51.5m (nearly the height of the Sydney Opera House).

Mr Gamble, a married father of three who lives in Leicestershire, now seeks funds to see his vision come to life.

“The idea… has always been to build a crowd-created piece of public art, that will make hope visible,” he said.

“We’re not building this landmark to have something nice to look at, we’re building a community-focused structure that carries a legacy. Generations in hundreds of years’ time will see it and be inspired.

“Every penny donated through this crowdfunder will go directly into building the Eternal Wall and create a people-driven place of hope.”

“Every penny donated through this crowdfunder will go directly into building the Eternal Wall and create a people-driven place of hope,” – Richard Gamble, instigator of UK’s Eternal Wall of Answered Prayer

“I strongly believe it will come to be as loved by people locally and nationally, and brilliantly complements our work on improving mental health and wellbeing,” he said.

Helping those in need

Once built, Mr Gamble expects the Christian landmark will attract 300,000 visitors each year, contributing millions to the local economy.

Further, all profits raised from the ongoing operation of the Eternal Wall of Answered Prayer will go towards social housing.

All profits raised from the ongoing operation of the Eternal Wall of Answered Prayer will go towards social housing.

According to a statement, the project will link with two social housing partners in the UK, to provide enough finance to build 100 houses.

“Social housing is at a crisis point in the UK,” Mr Gamble said.

“And it is our hope that we can play a small part in contributing to providing more homes.

“Our hope would be that [the wall] creates opportunity to support those charities who are working to help those most in need.”

The design of the monument was chosen following a global competition run by the Royal Institute of British Architects in 2016.

The Möbius concept was submitted by Southampton based architect Paul Bulkeley.

It is expected building will begin in 2022. 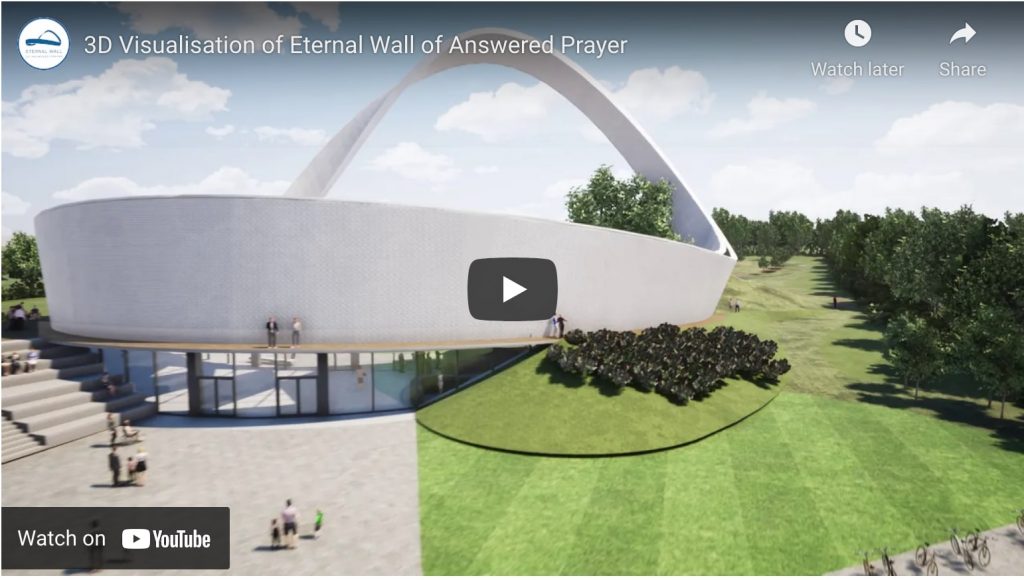