This year has been a historical one for cinema, including Disney’s long-awaited live-action remake of Mulan – releasing on its streaming platform on Friday 4th September.
Bringing the animated 1998 Disney movie to life, Mulan is about a young Chinese girl who conceals her identity to take the place of her father in the Emperor’s army. Mulan nominates herself to fight with the men in a war against the Huns, showing herself to be a great warrior – but also puts herself and her family name at risk as she tries to hide her identity.

What has made Mulan a standout in the Disney archives is its rare focus on Chinese tradition and family dynamics.

Mulan’s expected to be a carer to her parents and siblings and to become a woman suitably fit to be match-made with the best eligible gentlemen. Her talents on the battlefield don’t factor in to what society expects of her, and there’s a constant tension between her adhering to her cultural role, and seeing where her skills could take her without disrespecting her family.

It may sound like a familiar narrative: the lead character learns to use their gifts instead of hiding them, and thus becomes all they were called to be. However, where that story can often centre on ‘realising a personal kind of greatness’, or feeling the satisfaction of actualising your own full potential, Mulan embarks on her quest selflessly.

Mulan enlists in the army to save her aging father from going into a battle he’d likely perish in, and her family are her first thought as she represents their name on the battlefield; you never get the sense Mulan’s craving a moment to finally ‘prove herself once and for all’ and show everyone what she can do. 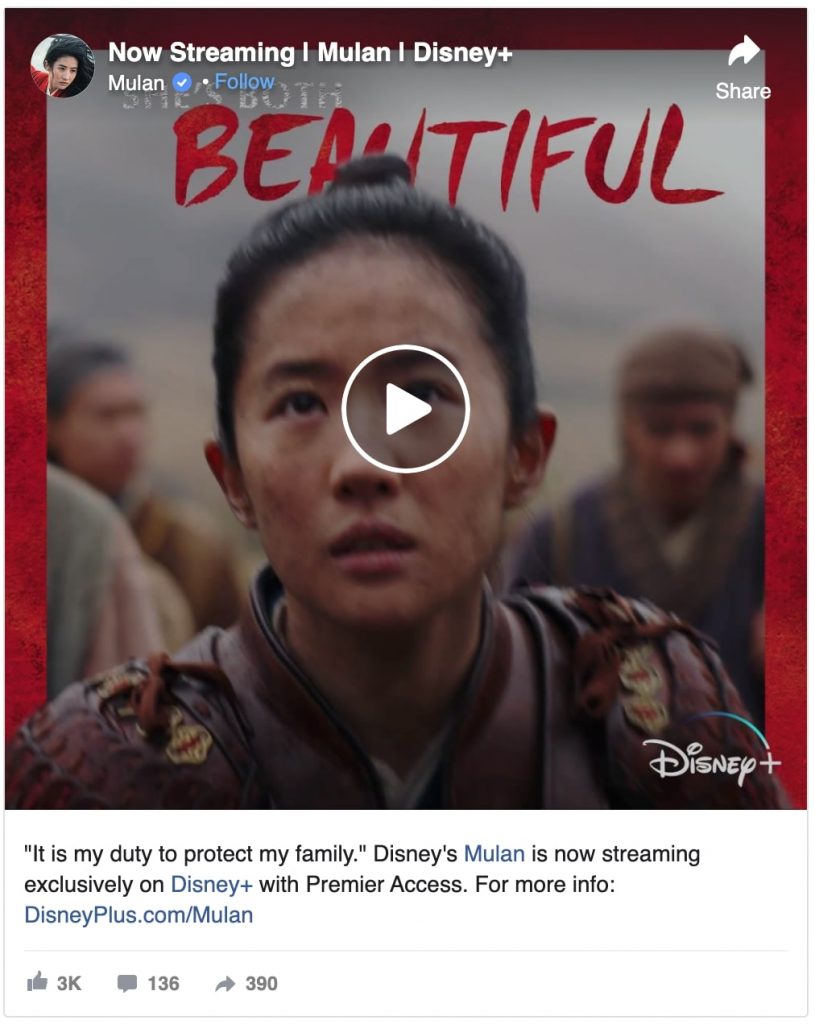 In focusing on eastern traditions, the language of ‘Qi’ or ‘Ch’i’ and magic – and our internal connection to the universe – are all on display, which some parents may be mindful of, but in learning about her Qi, Mulan is learning about her unique inner strength as she faces her enemy and confronts people using their Qi for evil by discovering how to use her’s for good and why its potential shouldn’t be wasted.

Originally set for a cinematic release, Mulan‘s mostly streamed release has made fans happy, but has meant the US$200 million used to reimagine it for the big screen and create some sweeping PG-approved battle scenes has become a bit redundant.

That said, as far as Disney heroes and princesses go, Mulan is one of a kind. Her story of not waiting to fit in, to serve with the gifts she’s been given, is timeless and can encourage everyone of any age or gender, whether seen on the big screen or not.

Mulan is streaming now on Disney+ and is rated PG.

tags: Articles Disney hope 103.2 movie review
0
previous The Artist Spotlight With Josh Baldwin
next ‘The Secret Garden’ — A Place to Heal Together, In a Year of Being Forced Apart
Related Posts