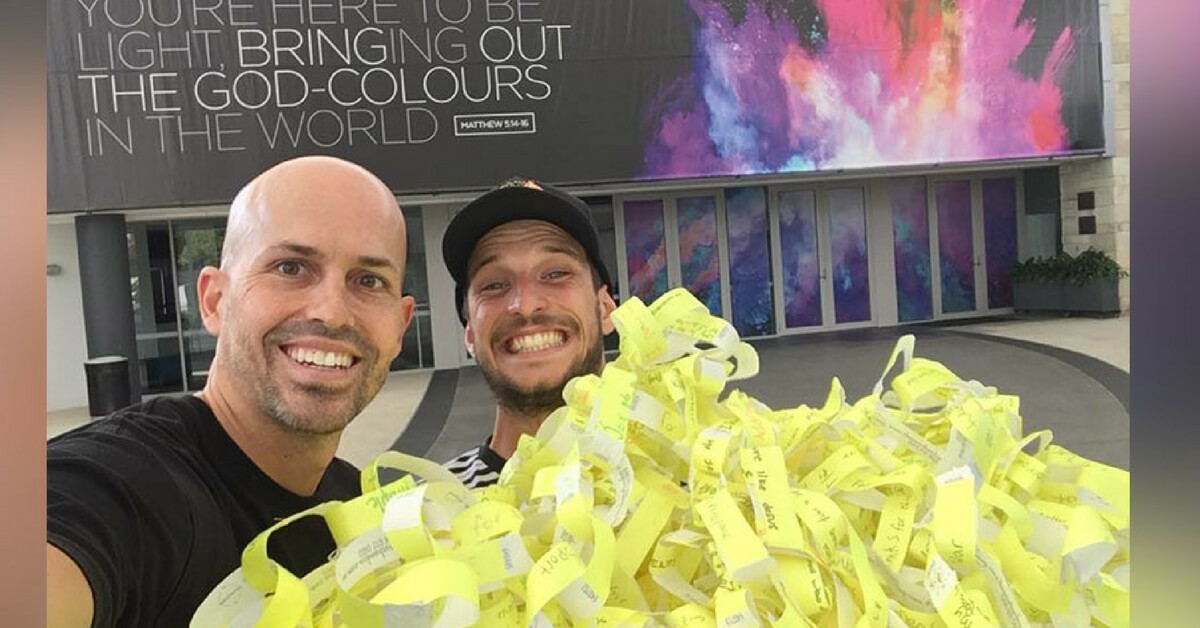 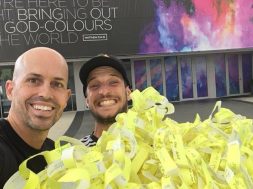 On each of those looped wrist bands, is a message: a prayer to God, written by an ordinary Australian, about something they want to see changed for the better.

This picture became a reality during the Commonwealth Games on a Gold Coast beach last week—in an initiative called the ‘World’s Longest Prayer Chain’.

It all began when local churches learnt the Games were coming to their city. Youth pastor Ben Thompson, from Beachside Baptist Church, was brainstorming ways to spread God’s love during the Games when he hit on the idea of the prayer chain. Ben believed it could become a conversation starter with people on the streets.

The idea took off.

Word of the initiative was spread via Youtube and Facebook, as well as by prayer teams who were following the Commonwealth Games Queen’s baton relay, and churches and youth groups from hundreds of towns as far-flung as Townsville, Mildura, Dubbo, Goondiwindi and Alice Springs, got involved. They sent in more than 57,000 wrist-band prayers to the Gold Coast church which volunteers spent many hours assembling into a giant paper chain, rolled up onto large wooden reels.

Last Saturday (April 14), Ben’s team gathered on the beach near Seaworld to measure the chain, by looping it out on the sand in 150-metre lengths. It reached 5.1 kilometres.

While a world record has never been established for a prayer chain before, there is a ‘World’s Longest Paper Chain’ record, which is what Ben hopes they can break—with prayers. Ultimately, they’re aiming for a length of 177 km, requiring over 2.2 million wrist bands in total. (Environment lovers will be pleased to know the wrist bands being used are made of paper which is both recycled, and recyclable.)

Normally, ‘prayer chain’ is a term referring to a network of people, messaging each other to pray for one another’s needs. But in this case, the meaning has become literal.

To reach Ben’s goal, the World’s Longest Prayer Chain will need to be spread around the world. It’s now on its way to its next stop, Sri Lanka.

Do the Prayers Reach God?

The question on some minds may be, does each individual prayer reach God?

In Ben’s view, absolutely. He says that when each person writes their request down, that is a valid, heartfelt prayer to God. However, volunteers have also been praying over the requests as they worked to assemble the chain, and also while they measured its length on a long stretch of beach on the Gold Coast.

“When they were written, they were prayers,” Ben said. “They were valid from the start. And as we were assembling them, we sort of ‘spot-prayed’, and when we stretched them out on the beach, we had a group of about 50 volunteers, sifting through them and praying as the Lord led us. Finally they will be sent around to churches who request a length of the chain, and they can pray through them again. So they’ve been thoroughly prayed for!”

Ben said the process of reading thousands of prayers gave him a snippet of what it must feel like to be God, listening to the prayers of people all over the world at once.

“One lady started crying and felt that the Lord led us there to pray for her…her daughter’s husband had just left their marriage.”

During the Commonwealth Games, Ben took a team of young people from Youth With a Mission, presenting the Prayer Chain initiative and praying for people on the street. He said it was a memorable time where God worked in unexpected ways.

“One lady in particular saw us coming from a distance. I sat down across from her and said ‘how can we pray for you?’. She welled up in the eyes and started crying and felt that the Lord led us there to pray for her, because her daughter’s husband had just left the marriage after 19 years, which left a child in the lurch, and she was now feeling overwhelmed and needed support. There we were, saying, ‘we want to support you in prayer’. She felt really blessed by that.”