Space movies have been all the rage with the 50th anniversary of the moon landing this year. We’ve seen the Apollo 11 documentary. Armstrong is soon to be released, and First Man prepped us for the milestone a while ago.

Ad Astra is boycotting the ‘rah-rah’ though, and looking at space through a different lens.

The premise of Ad Astra is simple: after a global electrical surge threatens earth, astronaut Roy McBride (Brad Pitt) is sent on a mission to Neptune to see if his missing astronaut father (Tommy Lee Jones) is still alive and instigated the surge. The implications of Roy’s voyage are vast though, and the personal introspection it triggers is what Ad Astra is really about.

As Roy embarks into outer space and considers a reunion with his father, he asks deeply human questions about connection — how to find it, and how enveloped his identity is in false relationships.

It’s a lot to ponder on, in what is a hugely symbolic movie. It’s not quite as ethereal as Gravity or Interstellar, but you can tell Brad Pitt and director James Gray were in a very philosophical mood when they decided to make it. 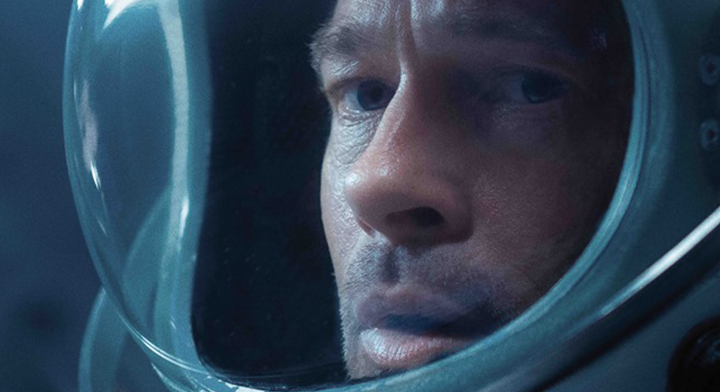 There’s a sense that both Brad and James were having an existential crisis, and wanted a really beautifully shot, high-budget way to explore it. And that’s not to diminish how grounded and ‘real’ the movie is, it just also requires a lot of head space.

Roy represents the part of ourselves that isn’t sure how sincere our connection with one another is, and is equally uncertain of how to fix that. Against the backdrop of space, where Roy’s completely separated from the world, he wonders what drives a man into isolation. Is it anger? Pain? Or are we just really bad at conversation?

Ad Astra also sets itself up as a version of the future where man has semi-colonised the Moon and Mars, and are finding the imagined utopia they dreamed of is still coloured by man’s brokenness. The way we build, interact and take possession of land is still divisive, and someone is always worse off.

(Although, neon ‘Virgin Galactic’ signs on the moon do give you a giggle — Richard Branson would be proud, and Elon Musk would be feeling very deflated).

Brad Pitt certainly carries the movie, as the primary face and voice of every scene. Which, so far, most critics are saying is a real win, reminding us Brad’s great cheek bones do come with great acting cred.

It’s why he can be a little more choosey about the roles he takes on now, with Brad telling GQ, “I hit this point in the late ’90s or early 2000s, where I realised I was chasing these interesting [roles], yet I was failing to live as interesting a life as I thought I could.

“[When you get older] you become more aware of time, and you’ve had more experience, good and bad, with people. And your own wins and losses…don’t seem like so much of a win or so much of a loss. Who you spend your time with, how you spend time — it has just become much more important to me,” Brad said.

Time. The meaning of life. The significance of fatherhood. You’ll be thinking about all of these things and more after Ad Astra.

Oh, and what does Ad Astra mean? It’s Latin for ‘to the stars’ — the very place Roy and his cohorts are looking for hope.

Let’s hope they realise to look to the One who made them too.