Every year Australia’s states and territories release the names of every child born. At McCrindle, we conduct an analysis to look at the top baby names and the trends associated.

The numbers are in, and the analysis is complete, here are the top baby names for 2022.

For the first time in seven years, Australia has a new most popular baby girls’ name. Millennial parents of Generation Alpha are still looking to be unique for girls’ names, while relying on more traditional names for boys as well as drawing inspiration from colours, places, nature and the Royal Family to choose a name for their baby.

For the first time since 2015, Australia has a new top baby girl name. Isla, the name given to 1,539 Australian baby girls in 2021, has risen from 4th position to debunk Charlotte from her long-standing number one baby girl name title. Since Generation Alpha began being born, Isla has seen a surge in popularity from 34th position in 2010 to 4th in 2020 and now ranks as the most popular name for baby girls born in 2021.

Oliver has been consistently popular among Generation Alpha baby boys, holding nine years of uninterrupted reign since overtaking Jack as the number one boys’ name in 2013. Oliver is also the only name to be given to over 2,000 babies in 2021 (with 2,263 Australian baby boys given this name in 2021). 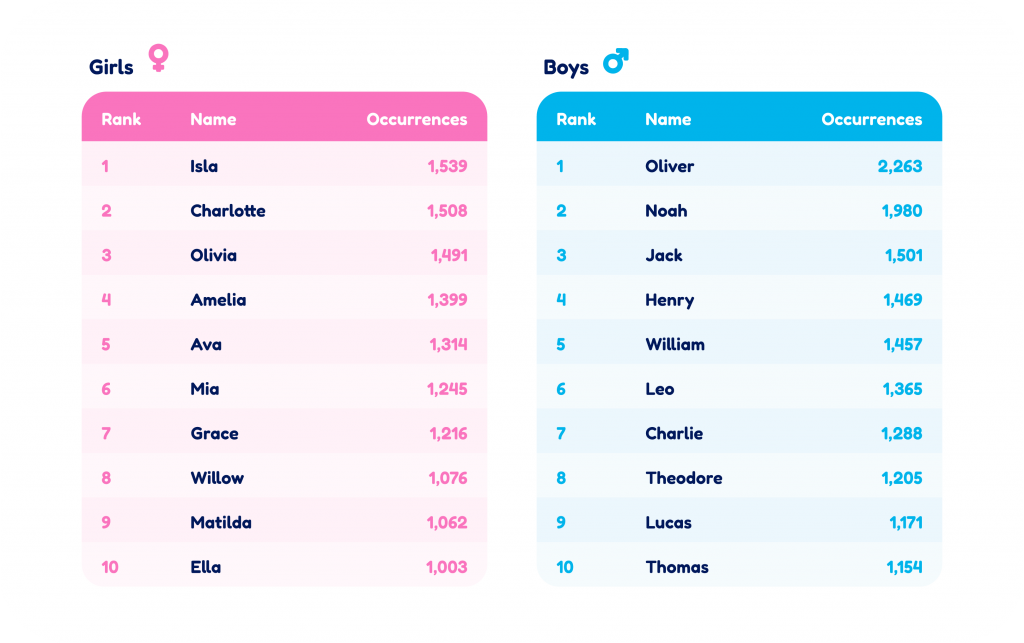 Names that have debuted for Generation Alpha

While Generation Alpha haven’t finished being born yet, there are clear trends when it comes to the most popular baby names for this generation. Of this years’ Top 100 list, almost half (47) of the girls’ names did not feature on the list back in 2010, compared to a third (33) of boys’ names. This shows the trend of more variety in girls’ names than boys’.

Some of the most popular names that have debuted in the last decade for girls include Hazel, Florence, Daisy, Frankie, Luna, Ayla, Sadie, Billie, Millie, Aurora and Mila.

Even in these debuted names, we see some of the prominent baby naming trends of colours, nature-inspired names, botanic names, names that end in ‘ie’ and place names.

Some of the most popular names that have debuted for boys in the last decade include Theodore, Hudson, Arlo, Archer, Harvey, Carter, Arthur, Sonny and Asher.

Names to watch in the coming years

While the emerging boys’ names haven’t debuted in as strong positions as some of the girls’ names have, boys’ names that have debuted in more recent years like Arthur, Ari, Ezra, River, Theo, Billy, and Luka have been steadily growing in popularity and are names to watch in the coming years.

Only two names feature in both the girls’ and boys’ list

The only two names in the Top 100 that appear on both the girls’ and boys’ list in exactly the same spelling are Charlie (80th for girls and 7th for boys) and Riley (which debuted on the girls’ list this year at 86th and is 50th for the boys’ list).

In true Aussie fashion, we are also seeing a trend of shortening names and adding an ‘ie’ on the end: Rose to Rosie, Savannah to Sadie, Amelia to Millie, Isabella to Billie, Charlotte to Charlie, Elizabeth to Ellie and William to Billy.

In fact, there are sixteen girls’ names that end in ‘ie’ or ‘i’: Evie, Sophie, Frankie, Ellie, Elsie, Billie, Mackenzie, Sadie, Bonnie, Remi, Millie, Charlie, Hallie, Maggie, Heidi and Rosie – a trend that has been increasing in the last few years. Only eight boys’ names end in ‘ie’ or i’: Charlie, Archie, Levi, Kai, Eli, Ari, Bodhi and Ali.

Millennial parents continue to use the botanical theme as a sourcing of naming their daughters, and this sentiment has risen for the unique botanical names including Willow (8th), Lilly (13th), Ivy (14th), Violet (28th), Daisy (34th), Poppy (38th), Olive (68th) and Delilah (71st).