The year 2010 marked the beginning of a new generation – Generation Alpha, the most digital, global, and visual on the planet. They are the children of the Millennials and will finish being born at the end of 2024. We gave this cohort the name Generation Alpha (of the Greek alphabet) because, being born entirely in the 21st Century, they are not a return to the old but the start of something new.

Oliver and Charlotte the most popular names for Gen Alpha

Around one in ten babies born last year were given a top ten baby name, with Charlotte and Oliver taking the crown for the most popular baby names in Australia once again. Over the last ten years, Charlotte has been crowned number one for seven of those years and has been the #1 girls name every year since overtaking Olivia in 2015 (the same year Princess Charlotte was born). But the gap is closing. In 2018 there were 219 more Charlottes than Olivias, while in 2019 there was only 34 more Charlottes. While in a slightly different order, the Top 10 girls names haven’t changed in the past year.

Oliver has also been consistently popular over the last decade, having enjoyed an uninterrupted seven years at the top spot since overtaking Jack as the #1 boys name in 2013. Last year, Noah became the second most popular boys name having overtaken William and Jack, while Charlie has entered the Top 10 at the expense of the name Liam, which dropped to 11th place. 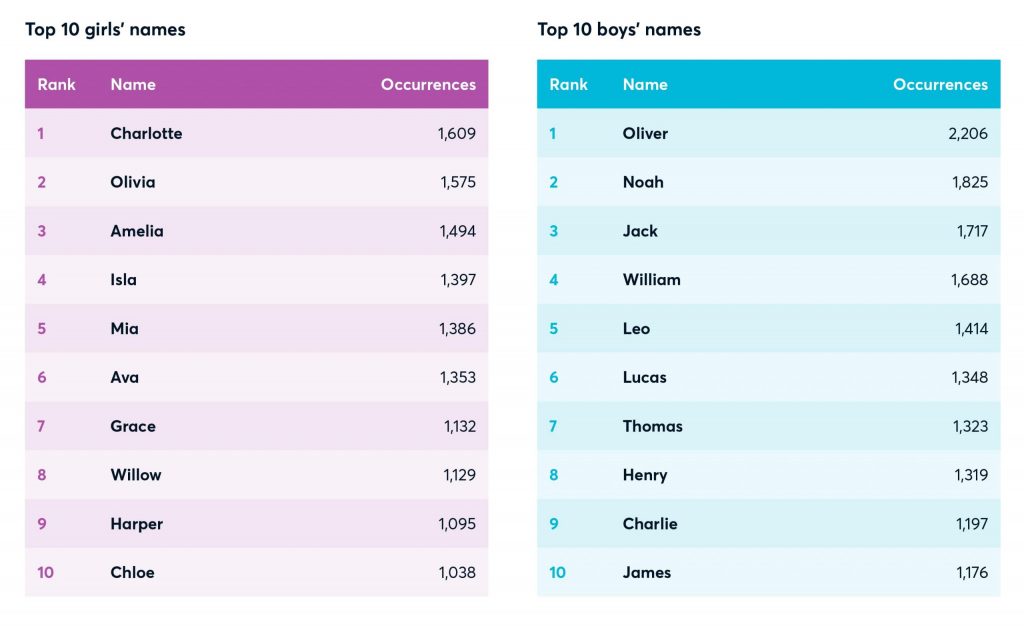 The boys names Ezra, Felix, Marcus, Fletcher, Ari, Aaron and Billy have entered the list for the boys at the expense of Toby, Nathan, Maxwell, Nicholas, Blake, Phoenix and Leonardo.

As for the girls’; Sadie, Madeline, Riley, Peyton, Lilly and Rosie have entered the Top 100 with; Adeline, Eliza, Alyssa, Harlow, Hayley and Madeleine dropping out of the list.

In the last two years, the names making the biggest jump up the list are Arthur, climbing 23 places to 49th, and Millie, jumping 30 places to 69th.

In the last three years the crown for the hottest trending name goes to Luna. Luna entered the Top 100 for the first time in 2017, debuting at 83rd. Luna’s popularity continues to grow, jumping 21 spots in 2018 to 62nd position and a further 30 spots to be ranked 49th most popular girls name in 2019.

Names that have jumped over the last decade

As we conclude the decade of the 2010s, we can see the names that have so far stood the test of time for Generation Alpha babies.

Since 2010, Leo jumped an incredible 86 positions to sit in 5th position. George jumped 45 positions over the last decade, now in 33rd position. This could be attributed to Prince George’s birth in 2013, who is third in line to the British throne.

Only two names in the Top 100 appear on both the girls’ and boys’ list in exactly the same spelling – Charlie (75th for girls and 9th for boys) and Riley (debuting on the girls’ list in 2019 at 81st and sitting at 43rd on the boys list).

There are a number of names with female and male iterations: 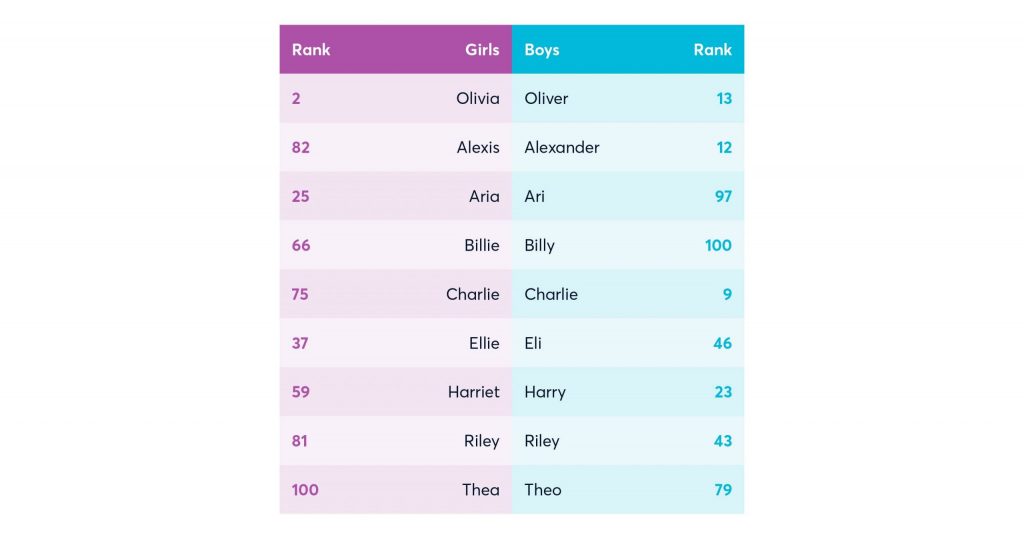 While most names on the Top 100 are more distinctly boys’ or girls’ names, several girls’ names from the Top 100 can be interchanged for boys’ names. Some examples of these names include Harper (9th), Frankie (36th), Mackenzie (52nd) and Peyton (89th).

In true Aussie fashion, we are also seeing a trend of shortening names and adding an ‘ie’ on the end: Rose to Rosie, Savannah to Sadie, Amelia to Millie, Isabella to Billie, Charlotte to Charlie, Elizabeth to Ellie and William to Billy.

Parents of Gen Alpha (the Millennials) have more access to information than at any other time in history. Parents are inundated with options, research and meaning, all impacting the names they choose for their children. Prior to the baby name books of the 80s, baby names were influenced by family and religious traditions. In recent years the internet has facilitated an explosion of blogs, websites and even baby naming apps. Baby name websites include not only baby name lists, but baby name search engines.

For parents of Generation Alpha, there is a trend to name one’s child something that won’t end up as generic as SarahSmith205 on social media. But it is also a name that needs to carry this generation through a lifetime of multiple careers. There are many trends and considerations for today’s parents when it comes to choosing a name for their Gen Alpha baby, with names for this generation considered digital real estate in an increasingly global era.

tags: Articles mccrindle parenting research
0
previous The George Floyd “Apocalypse”: What His Death Reveals About Our Western World
next After COVID-19: What Will Never Be the Same
Related Posts