Australia’s most recent census was a timely reminder that every stat tells a story. Data has the power to show us where we have come from and gives us a glimpse into the future of what could be.

From some of the earliest days of record-keeping, we can see that Australia has a long history of population growth. Since 1820 until today there are only two years in Australia’s history that have seen a net annual decline. These are 1915 and 1916 during the First World War. The 200 years of growth brings Australia to its current population of 25 million people. 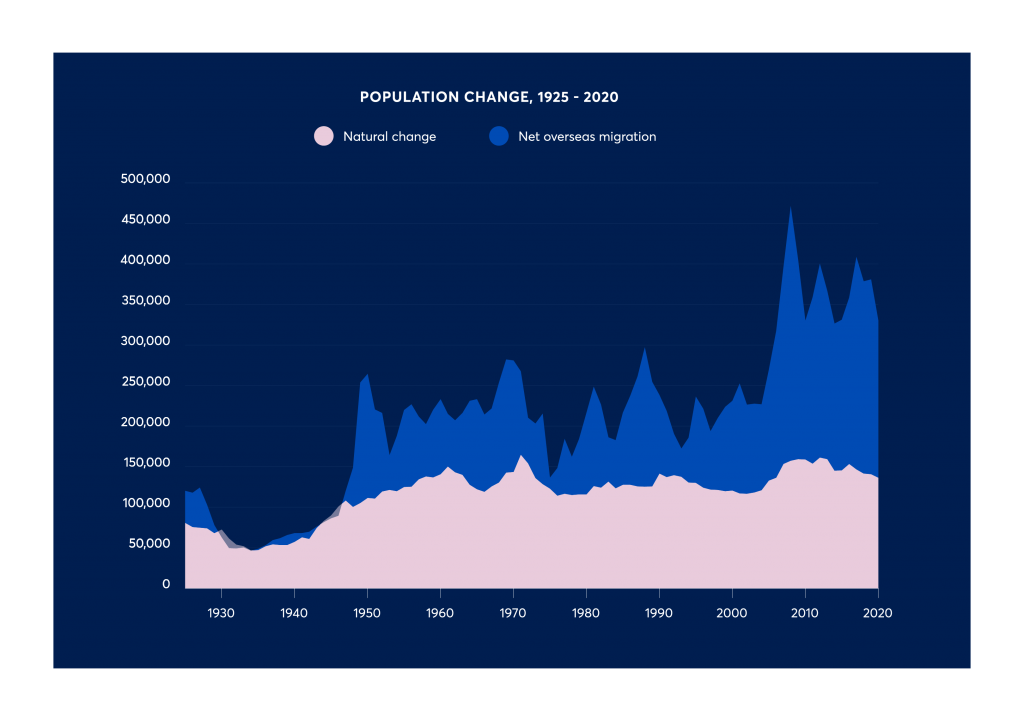 Australia is one of the most multicultural developed nations in the world, with twice as many residents born overseas (30%) as the United Kingdom (14%) or the United States of America (14%). This diversity of culture is likely to continue growing with a large proportion of Australia’s projected growth coming from net overseas migration. Even though COVID-19 has seen closed international borders which will impair Australia’s net overseas migration until the middle of this decade, our modelling shows that by 2030, annual migration to Australia will be close to the pre-COVID-19 numbers.

Since 1971 Australia’s median age has increased by 10 years. Just before the turn of the millennium the median age was 35 and since 2010 it has been steady at 37.

Over time, however, Australia’s population has been aging as the number of Australians aged over 60 overtakes those under 18. As a result, Australia’s median age was projected to rise and reach 39 by 2031. Considering lower net overseas migration, however, it is likely that Australia will reach a median age of 39 ahead of this forecast, most likely by 2026.

With Australians living longer, working later and more culturally diverse than ever before there is an opportunity for organisations to engage in a new way. Consider what opportunities there might be to engage an older worker where impacts, not finances, are a stronger motivator for where they spend their time. Similarly, consider how your organisation can engage in a way that embraces cultural and linguistic diversity.