In this interview, Chad Mattson from the band Unspoken chats about his faith journey,  how the band formed and the meaning behind some of the band’s songs. Unspoken is an American contemporary Christian band composed of Chad Mattson, Jon Lowry, and Ariel Munoz & recently, new member Ryan Babin.

Tell us about the story behind writing ‘Good Fight’.

A lot of our songs talk about the struggle of life. All of us go through highs and lows. When we’re low we need the encouragement, music, each other, that’s when we need those things the most. Those kinds of songs are the ones that really seem to resonate with people.

James 1 says that the testing of our faith develops perseverance, and perseverance must finish its work for us to become like Jesus. Every believer out there, their goal should be to become like God and the only way to that is through perseverance. We’ve got to persevere, we’ve got to continue to push through. So I feel like that song was an encouragement and a challenge and a call to continue to push through and fight the good fight. Trust the Lord, you can weather the storm with God’s help.

After 13 years of doing this, we’ve needed to hear that message many times. A lot of our songs are prayers that we’re praying for ourselves and then they turn into songs.

Tell us about the history of ‘Unspoken’.

I grew up in a Christian home and I’m so grateful for my parents that taught me about Jesus and didn’t give up on me even when I wasn’t following the Lord. I got into using drugs and selling drugs in my early 20s and my life was a wreck and it was dark and I was desperate. But I got a business card from these missionaries, from the Dominican Republic, that came to preach at my church. My older brother brought me home this card and said, “I think you should consider doing something like this, your life’s going nowhere”.

So a few months later, the Lord was kind of pulling on me and after being sober 3 years and 6 days, I kind of cried out to the Lord and just said, “Lord what can I do? How can I get free?”. I called up these missionaries and I asked them if I could come hang out with them. I went by myself, for 2 months. Flew from Boston down to La Vega, Dominican Republic – which is right in the middle of the country, it’s the third largest city – and hung out with these missionaries.

For the first time in my life I started to read the Bible and pray every day for an hour. I committed. I couldn’t change everything, I had so much going on. The amount of change and the amount things I needed help with was so massive that it was overwhelming, but I decided to make one change in my life which was going on this trip. And while I was there, I was going to read, pray and seek God until the Lord did something crazy in my life. 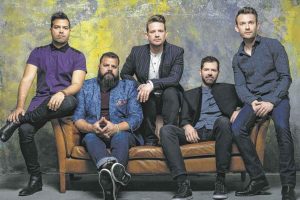 The Bible says in Romans 12, don’t be conformed to the world, don’t be like everybody else, but be transformed by the making new of your mind. As we read the Bible and pray, God’s Spirit comes into our lives and changes who we are, to who He wants us to be. It’s a pretty incredible thing.

So when I was in the Dominican Republic, my life changed around, I got sober and I met a Dominican kid who played the guitar. And to make a long story short after 2 months of being down there, he moved back to Maine with me. And this Dominican guy is Mike Gomez who’s our guitar player. We bought my grandparents 1994 sharp blue Fleetwood Cadillac, which is the biggest old person’s car in the entire world.

We started loading up the guitars and going anywhere from street corners to New York city subways, nursing homes, open mic nights, camp grounds, just the middle of a city. Anywhere we could, preaching the Gospel, sharing our music using that as a tool to get people’s attention.

That was 13 years ago and over the years, pretty quickly we’ve picked up the rest of the guys in our group. And so we’ve all been together for well over a decade. This past year we picked up a keyboard player, who is an unbelievable, ridiculous musician. So finally there’s the original four and then our brand new keyboard player, whom we love and we’re just loving it.

Podcast and article supplied with thanks to Rhema 99.7.