Over the duration of this pandemic, the reality of human trafficking and the online exploitation of young girls and women, in particular, has been an increased area of concern.

With many children forced into home-schooling and widespread isolation influencing our digital behaviours, anti-slavery organisations like A21 have been working hard to curb the opportunistic trend toward abuse, both in the online and offline worlds.

Blake Loaney is the Reach Manager of A21 Australia, and said in an interview, “There are more people enslaved in the world today that at any other time in history”.

“According to the global Slavery Index, there are estimated to be 40.3 million people in slavery around the world and, in Australia, there’s estimated to be 15,000 people living in slavery, and slave-like conditions,” she said.

In 2018, an opportunity for progress was made, with the introduction of the Modern Slavery Act. A piece of legislation that would require businesses “to report on the risks of modern slavery in their operations and supply chains, and take actions to address those risks”. Essentially, amplifying the need for companies to be accountable for how their employees are treated at all points of production, not just in the country of final sale or development.

Confusingly, although the Act was passed by both houses of NSW parliament at the time, it’s not still come into force.

The Act had been put to a parliamentary committee, who said it should be enacted by January this year with a few amendments, and still there’s been no apparent progress. As a result, this morning the delay saw anti-slavery activists petitioning outside parliament for the NSW Government to take action on the life-saving legislation.

Those kinds of governmental setbacks and the confronting statistics on slavery are confronting, yet A21 has long believed in abolishing slavery “forever, and for everyone”, by focusing on steps to prevent the trade and bring greater awareness of how it plays out in local contexts around the world.

Through their three-pronged approach of Reach, Rescue and Restore, A21 aims to educate international communities about the prevalence of slavery and abuse, while helping those abused get out of their situation safely, and be supported as they’re re-introduced to normal life.

In Australia, Blake says one of the organisation’s biggest challenges is to help people see the scale of the need in our own country.

“So many people are unaware that a) human trafficking happens at all, or b) that it is actually happening here in Australia,” she said.

“According to the 2020 Trafficking and Persons report… [In Australia] traffickers primarily exploit women and men in forced labour, and to a lesser extent women and girls in sex trafficking.

“Australia’s what’s known as a ‘destination country’, meaning that we receive victims from overseas predominantly to be exploited here [in a number of industries].”

As a result of the changes the COVID-19 crisis has had on our work and social lives, Blake said, “increased unemployment and people losing their jobs, [has led] to increased vulnerability for people who are looking for new opportunities and new avenues of work”.

“Some of these people take greater risks in getting employment and traffickers do exploit that; trafficking occurs where there is heightened vulnerability.”

In October, A21 will be holding an online Global Freedom Summit to address the current issues relating to human trafficking and slavery, inspiring people to take action and see the practical ways they can instigate change in their local setting.

Being held in place of their annual Walk for Freedom – which was reimagined due to the pandemic – Blake said, “We want to inspire and equip people to fight human trafficking right in their city and town or community”.

“In the broadcast, people will be learning about what human trafficking actually is… strategies to combat it, and what individuals can do right where they are to end modern-day slavery,” she said.

We’re told one of the first things we can do is know the signs of enslavement, and report instances where we think someone might be being taken advantage of.

When it comes to what to look out for, Blake said, “It could that that person is being controlled by another person”.

“They might not be able to communicate on their own behalf and have someone else communicate for them, or there might be signs of physical abuse, and their movements are controlled.

“There might be a lack of trust of those around them. They may have a lack of personal belongings on them and show signs of dependence on whoever they’re with. And, of course, they may have been deceived by a false job offer.

“These kinds of signs and indicators don’t mean someone [definitely is] a victim of human trafficking, but they are some of the areas to look out for,” she said.

A21’s Global Freedom Summit will be held on October 17. For more information on the signs of slavery visit A21’s Can You See Me? campaign.

If you suspect someone is being exploited or has been trafficked in Australia, report it to the Australian Federal Police. 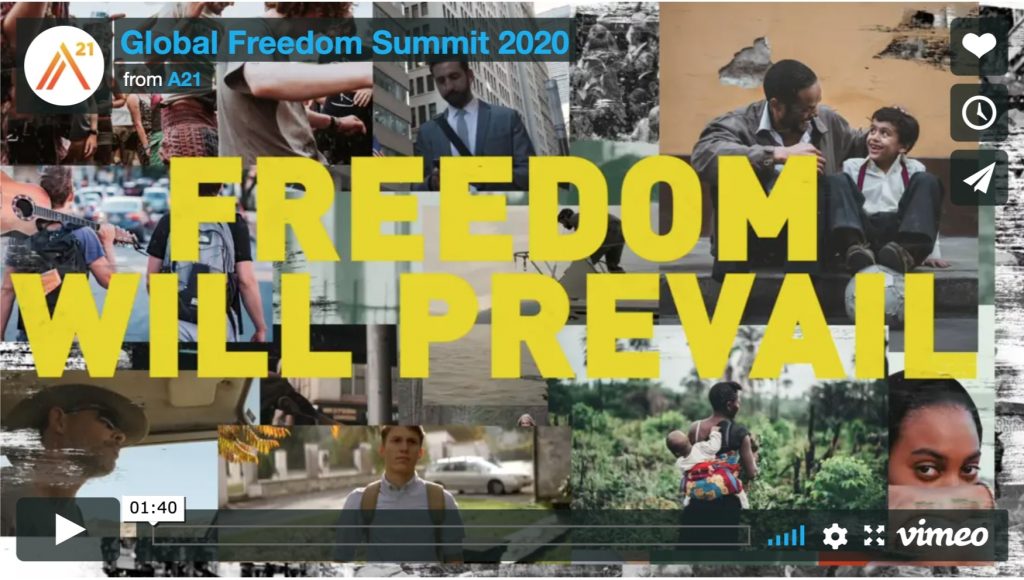