A Beautiful Day in the Neighbourhood’ [Movie Review]

A Beautiful Day in the Neighbourhood’ [Movie Review]

If you don’t know who Fred Rogers is, A Beautiful Day in the Neighborhood is a really strange movie.

Inspired by a 1998 article in Esquire magazine, ‘Can You Say… Hero?’, it follows the real-life friendship between the journalist Tom Junod, and the famed American TV host Fred Rogers.

Rogers is beloved by Americans who grew up watching his pre-school TV series Mister Rogers’ Neighborhood in the ‘70s, ‘80s and ‘90s. A musician, puppeteer, writer and Presbyterian minister, he shaped the childhoods of millions for over 30 years.

His show was renowned for talking about issues like death, divorce and anger in ways kids could handle, and for teaching them how to process the emotions they confronted in daily life. 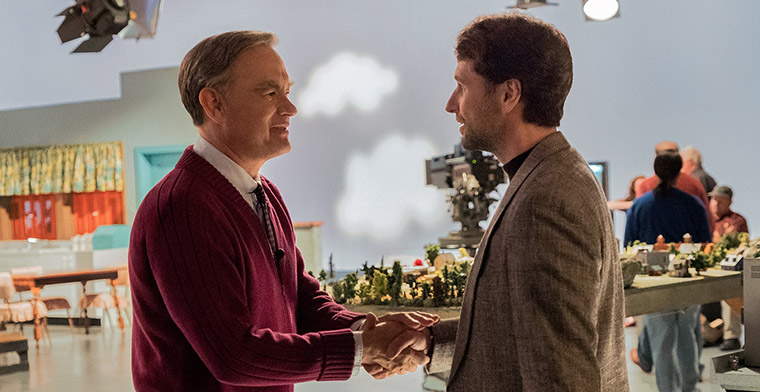 At face value, Fred was not the kind of guy you’d imagine as a TV host; he had a quiet and unassuming demeanour, with a bit of straight-laced awkwardness from his Presbyterian roots, caring little for the clock when someone needed a listening ear. He wasn’t interested in talking about himself, and apparently drove Tom Junod nuts enquiring about his own life instead of answering questions himself.

It’s a combination you wouldn’t think leads to a successful television career, but endeared Fred to families for life. Kids trusted him with their deepest concerns, and rooms would go quiet as he walked in, filled with deep respect and wonder at what he might do next.

Without a personal connection to Fred, A Beautiful Day in the Neighborhood is an eerily slow-going reflection on early television, as well as an insight into how one man’s kindness impacted the relationships of a burnt-out, emotionally broken writer.

The film actually places Fred as a secondary character to the journalist (in this movie, he’s named Lloyd Vogel, played by Matthew Rhys) – giving us only a small glimpse into his world as he speaks with Lloyd and invites him on set. Brief clues show us that Fred wasn’t sure how to handle fame, but wanted to use it well; had a close bond to his wife and a complicated one with his kids; and probably used the show to process his own demons as much to help children deal with theirs.

We learn far more about journalist Lloyd, whose sisters’ third marriage brings his hatred of his father to a head – and whose bitter scepticism compromises his faith in people, including Fred.

Introverts Can Change the World, Too

For an audience outside of the US, A Beautiful Day in the Neighborhood is unlikely to leave you with feelings of fond nostalgia, and will be a bit puzzling. But it does offer us a worthy realisation that ‘funny’ isn’t the only currency in media. There’s many comedians who can win us over with one-liners, but so too can the gentle, kind and perceptive introvert.

Fred understood humanity in a way that gave attention to unseen concerns, spilling over into his decision to be vegetarian because he “couldn’t bear to eat anything that had a mother”.

He was different, and that’s what made him captivating.

“There’s many comedians who can win us over with one-liners, but so too can the gentle, kind and perceptive introvert.”

Fred spoke about deeper issues on the show, because death, for instance, is an inevitable part of being human – and said that, “Anything human is mentionable, and anything mentionable is manageable.” It’s a simple thought, but it reveals a care for fans’ internal wellbeing, and a firm belief that we can ease one another’s burdens if we will simply talk about things.

A Beautiful Day in the Neighborhood champions kindness and care, and proves Tom Hanks’ ability to embody any character—but its nuance may be lost on non-American audiences.